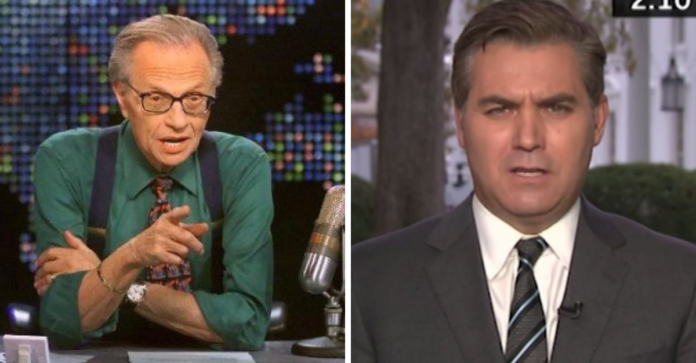 Former CNN host Larry King weighed in on CNN’s coverage of the news, with some unflattering comments for his former network.

King, who now broadcasts on Hulu and RT America, said of CNN that they “stopped doing news a long time ago.”

When talking about how it came about that CNN gave so much of their coverage to President Donald Trump, who often calls them “fake news,” the longtime newsman said that initially, they covered him as a Republican candidate, more than any of the others.

“CNN stopped doing news a long time ago,” King said while being interviewed by another former CNN anchor, Rick Sanchez. “They do Trump. Fox is Trump TV and MSNBC is anti-Trump all the time.”

“Larry King Tonight” was CNN’s longest-running program, which was first broadcast in 1985 and ended in 2010.

King also said he thinks that CNN gave more time to Trump over more newsworthy issues that they typically might have covered.

“They covered him as a character. They carried every speech he made. They carried him more than Fox News, at the beginning,” King said. “And so they built the whole thing up and the Republicans had a lot of candidates and they all had weaknesses.”

“You don’t see a story — there was vicious winds and storms in the Northeast the other day — not covered on any of the three cable networks, not covered,” King noted. “So when CNN started covering Trump — they were the first — they covered every speech he made and then they made Trump the story. So, Trump is the story in America.”

King’s comments came after CNN President Jeff Zucker told Vanity Fair that the network dedicates so much time to Trump, due to viewer demand.

“People say all the time, ‘Oh, I don’t want to talk about Trump, I’ve had too much Trump,’ “Zucker told the magazine on Nov. 1. “And yet at the end of the day, all they want to do is talk about Trump.”