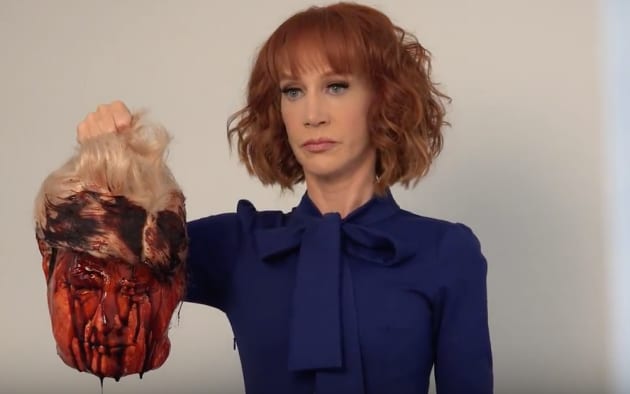 D-list comedian Kathy Griffin is recycling the same tired “joke” and calling it a new routine. In her latest cash grab, she replicated her infamous stunt with a Trump mask.

She strutted on stage, confident as a preening bird. She was clad in the same blue dress made infamous during her first attack on President Trump. This time, however, she opted for innuendo rather than vulgarity.

Instead of clutching a bloodied Trump mask in her hands, she wore the mask the way it was intended. After flouncing around on stage, she took a knee, still dressed in the Trump mask. After a round of applause, she whipped it off.

“My own Harvey Weinstein is named President Donald Trump,” Griffin whined. “Women who have rebuffed them or reported their behavior to no avail.”

Griffin is pissy because her stunt backfired so spectacularly. She became a social pariah. The picture of her gloating over a fake, decapitated Trump head was one of the most disturbing pictures of 2017.

Fans reacted coldly, and she lost what little bit of fame she had managed to accrue. Instead of admitting that she was losing her popularity, she blamed Trump. Apparently, he somehow “tanked” her career. Not well enough it seems, if she’s still booking gigs.

“When ‘The word is put out’ on you, it is often believed without question. ‘I hear this actress is too difficult.’ ‘She needs to be smacked down and put in her place.’ ‘Really? Oh, then I believe you. She’s dead to us…NEXT.”‘