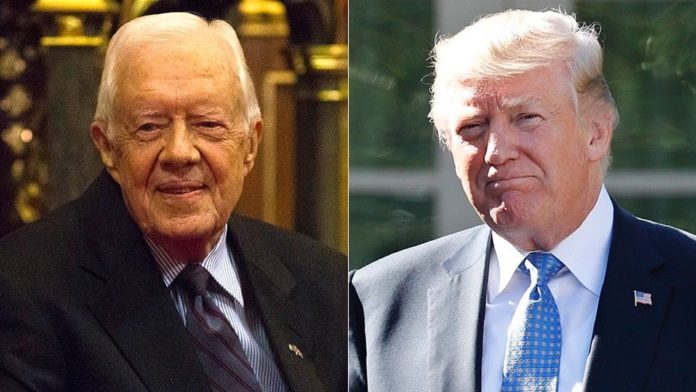 President Donald Trump has discovered an unlikely source of sympathy in The New York Times Sunday.

Former President Jimmy told a reporter at the paper that the press treats the Trumpster worse than any other chief executive in living memory. We tend to agree…

During the interview, the President Carter said:

“I think the media have been harder on Trump than any other president certainly that I’ve known about… I think they feel free to claim that Trump is mentally deranged and everything else without hesitation.”

What’s more is the fact that President Carter has offered his support to the Trump administration. His friendship with National Security Adviser H.R. McMaster has also led President Carter to praise Trump’s diplomatic initiatives in the Middle East.

President Carter (who is 93-years old?!) has even offered to serve as a back channel envoy, communication with China and North Korea on behalf of President Trump.

This isn’t the first time that President Carter, a pretty cool dude, has helped presidents. He undertook a secret peace mission to the walled-off nation of North Korea during Bill Clinton’s administration. During the mission he secured an agreement that halted the North’s nuclear development for several years.

So far, President Trump has declined helped from President Carter.

During the same interview, President Carter also dropped the bombshell that, though he endorsed Hillary Clinton in her 2016 White House campaign, he actually voted for Sen. Bernie Sanders! He also revealed that his wife also chose to vote for Bernie during the Georgia Democratic Primary.

It may be pertinent for President Trump to take the assistance of President Carter, considering his long-term track record of being an excellent politician (except for losing his second term). He is universally loved, unbelievably intelligent, and arguably the only politician with his heart in the right place.