This is the reality of what it’s like to live as a Christian in a territory occupied by the vile human filth that is the Islamic State. Not only is it a hellish chaotic place to make a living and raise a family, but Sharia Law and tight controls over people’s every move make it almost impossible for non-Muslims to leave.

As second-class citizens, “subjugated Christians” have to abide by this horrendous agreement, in return for their “safety”: 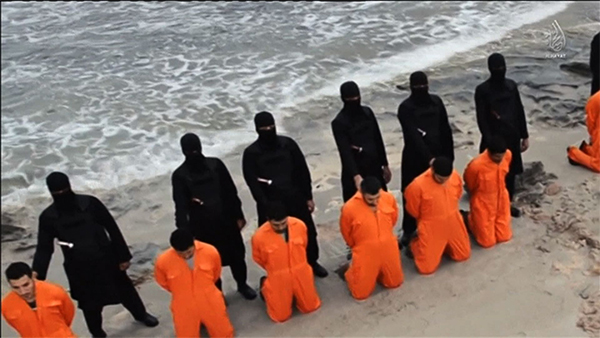 Such non-Muslim subjects are obliged to comply with Islamic rules that pertain to the safety and indemnity of life, reputation, and property. In addition, they:

-1- are penalized for committing adultery or theft, thought not for drunkenness;

-2- are distinguished from Muslims in dress, wearing a wide cloth belt (zunnar);

-4- must keep to the side of the street;

-5- may not build higher than or as high as the Muslims’ buildings, though if they acquire a tall house, it is not razed;

-6- are forbidden to openly display wine or pork, (A: to ring church bells or display crosses,) recite the Torah or Evangel aloud, or make public display of their funerals and feastdays;

-7- and are forbidden to build new churches….

If non-Muslim subjects of the Islamic state refuse to conform to the rules of Islam, or to pay the non-Muslim poll tax, then their agreement with the state has been violated (dis: o11.11) (A: though if only one of them disobeys, it concerns him alone).

-1- commits adultery with a Muslim woman or marries her;

-3- leads a Muslim away from Islam;

-5- or mentions something impermissible about Allah, the Prophet (Allah bless him and give him peace), or Islam. (Reliance of the Traveller 011.5; o119-10)

What are the rules, you ask?

THE SEVEN RULES IN RETURN FOR CHRISTIANS’ SAFETY

No treachery against ISIS

No church construction or repairs

Do not display crosses in Muslim areas or markets

No mockery of Muslims or Islam

Do not prevent others from converting to Islam

What an utter state of hell these brave Christians must live under. We need to do everything we can to let this be known and help our brothers and sisters in Christ. This injustice cannot stand – ISIS must be eliminated at all costs!