In the latest attack by evil Islamist organization ISIS, a bomb was detonated in a public square in Baghdad, killing more than 70 people at the last count, with hundreds more injured.

This marks another major terrorist attack by the organization that Barack Obama has famously said was “contained.”

Of course, Barack Obama has not released a statement on this, even though it is an area heavily occupied by the US military.

According to an initial report by Yahoo News, 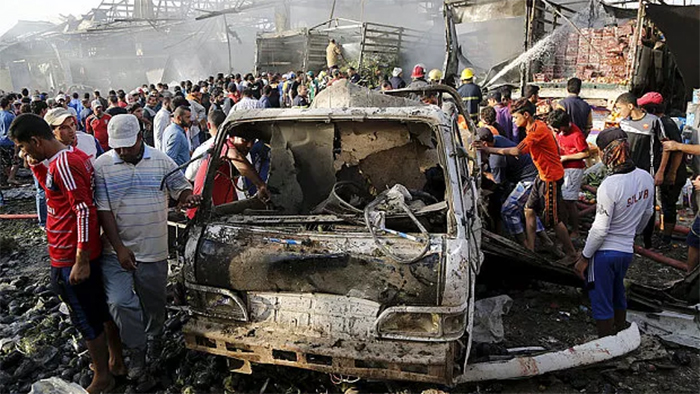 A bomb ripped through the crowded Mredi market in the Shiite district of Sadr City, a police officer said. Minutes later, a suicide bomber blew himself up amid the crowd that had gathered at the site of the first bombing, he added.

Multiple hospital officials later increased the casualty toll to 59 dead and 95 wounded. All officials spoke on condition of anonymity as they were not authorized to release information.

The attack was the deadliest in a wave of recent explosions that have targeted commercial areas in and outside Baghdad.

In the town of Mahmoudiya, about 30 kilometers (20 miles) south of Baghdad, three shoppers were killed and 10 wounded in a bomb explosion, another police officer said. Four others were killed in a separate bomb attack in Baghdad’s southern Dora neighborhood, he added.

This has to stop. We need a President that will put an end to these evil doings once and for all. Trump, We need you, like yesterday.

We will have updates to this story as it unfolds.