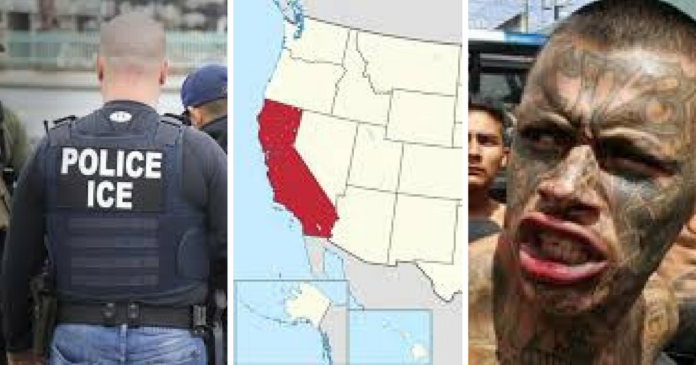 It’s rather insane to think that there are cities and states openly defying federal law and sheltering people who have invaded our nation. In a different time, that’d be considered treason, but in the current year, taking the law into one’s hands whenever people you don’t agree with are in power is the “morally superior” thing to do.

Leftists are having a field day trampling on the Constitution, pretending that they’re doing so in righteous defiance to Trump, but anyone with a room temperature IQ knows that the Left despises this country and will do whatever it takes to “fundamentally” transform it. While California has been at the forefront in defying Trump’s orders, especially when it comes to immigration, it appears that the administration has decided to ignore the nation-wrecking clowns driving the state into the ground and allow ICE to operate freely in the state since authorities there refuse to assist them.

As reported at the San Fransisco Gate, on Tuesday, federal authorities announced they arrested more than 150 illegals in a Northern California sweep aimed at countering local sanctuary laws.

They also said that more may have been captured if not for the actions of Oakland’s Mayor Libby Schaaf’s, who alerted the public about the secret operation to help illegals get a head start and elude justice.

US Immigration and Customs Enforcement officers have been operating from the Central Valley to the far northern reaches of the state, knocking on doors, detaining people, and sending left-wing activists to their fainting couches.

The Northern California operation is apparently quite large, and in response to the sanctuary policies and defiance of the state and its localities. Agency officials have said that at least half of those arrested thus far had criminal records already, many of them violent convictions.

“Sanctuary jurisdictions like San Francisco and Oakland shield dangerous criminal aliens from federal law enforcement at the expense of public safety,” said Thomas Homan, the acting director of ICE. “Because these jurisdictions prevent ICE from arresting criminal aliens in the secure confines of a jail, they also force ICE officers to make more arrests out in the community, which poses increased risks for law enforcement and the public.”

Homan slammed Schaaf, who took unprecedented steps on Saturday night to warn illegals in the area that ICE was preparing to make arrests. Schaaf said she issued the alert after receiving confidential tips from “credible sources,” and talking with attorneys to ensure she wasn’t opening herself up to federal prosecution.

The mayor’s move endangered ICE officers and alerted their targets, Homan asserted, “making clear that this reckless decision was based on her political agenda.” He said 864 “criminal aliens and public safety threats remain at large in the community, and I have to believe that some of them were able to elude us thanks to the mayor’s irresponsible decision.”

In a statement Tuesday night, Schaaf stood by her decision to go public.

“My statement on Saturday was meant to give all residents time to learn their rights and know their legal options. It was my intention that one mother, or one father, would use the information to help keep their family together,” the mayor said. “I do not regret sharing this information. It is Oakland’s legal right to be a sanctuary city and we have not broken any laws. We believe our community is safer when families stay together.”

It’s funny when leftists talk about breaking families up and whatnot as if these people don’t have the choice to return to their home country if a family member is deported.

“We stand with our hardworking, law-abiding immigrant neighbors and we are unified in our response to the divisive rhetoric of this president.” By definition, these people aren’t law-abiding.

It’s truly unbelievable the crap that these people spew and the actions they take. They are putting ICE agents’ lives on the line by alerting people to these raids. But it’s not like they care about them in the first place, which has been made abundantly clear by how staunchly leftists stand in the illegals’ corner. One wonders when this nightmare will end and sanity restored to the nation.