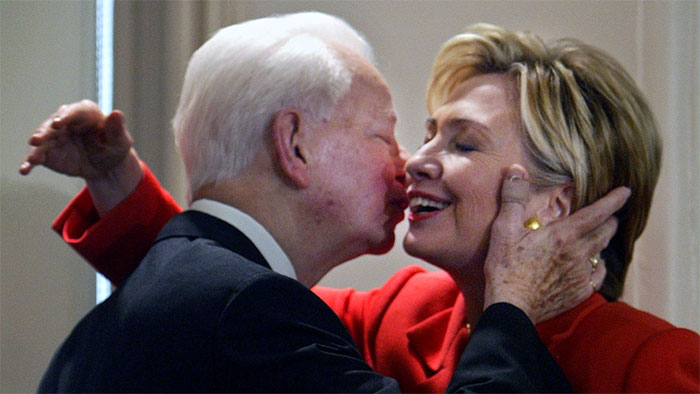 You know that tactic candidates use during the election cycles where they dig up dirt on the opposition in an attempt to make them seem weaker, untrustworthy, or just plain evil. Hillary has been doing it to Trump for months, let’s return the favor shall we?

On the evil side of things, you can’t get much worse than the KKK. The KKK is a racist and bigoted organization that believe in the complete eradication of any race other than whites. Also, not surprisingly, it was started by Democrats.

Even in today’s news cycle, you get KKK members making headway and sometimes, getting to very high levels of government. Robert C. Byrd is one of these individuals. Byrd, a former KKK leader, somehow got to be a senator for West Virginia despite his bigoted past.

And you’ll never believe who called him a friend and mentor. Take a wild guess.

Yes that’s right, Hillary Clinton herself. When Hillary became a NY Senator, she looked to Byrd for guidance. I’ll repeat that to let it sink in. Hillary, the Democratic nominee for the presidency, sought out a known former KKK leader to be a MENTOR and FRIEND.

It also lines up with hot the Democrats keep the black community at bay in their own neighborhoods and haven’t done anything to help them dig out of the poverty and violence that surround them daily.

This brings up a question: Is Hillary a racist as well? Does she want to continue to keep the black community down for personal gain? We can’t answer those questions without definitive proof, but this is as damning as any evidence we can find.