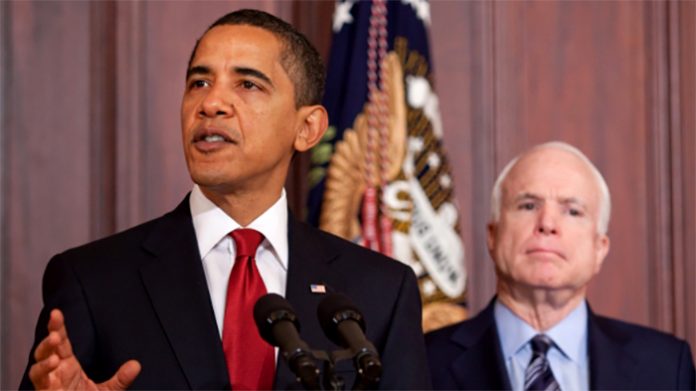 After Donald Trump’s “Second Amendment people” comment about stopping Hillary Clinton, the Liberal media and gun control nut jobs across the nation were livid. It was taking completely out of context and shows just how knee-jerk all Liberal reactions are.

It’s also no secret Barack Obama, along with the rest of the Liberal left, is attempting to disarm America. They can say, “we’re not trying to take away your guns,” all they want, but we know the truth. They would rather see an unarmed and passive American population so they can better control us. Fat chance. But as we also all know, the Liberals do-as-i-say-not-as-i-do attitude, completely flip flopping on their ideologies as long as it fits the narrative to make them stronger. Here is the most perfect example I’ve ever seen.

Back in 2008, when Obama was running for his first term of terror, he said something about guns and violence that would have most Liberals squeamish. It’s now been uncovered and it’s pretty damning evidence of his two-faced nature. It also shows that, Liberals talk about violence and guns in a way that no one else does, especially not the likes of a responsible gun owner.

After the media jumped on Donald Trump yesterday for his statement about “Second Amendment people” stopping Hillary Clinton, some are pointing out past statements by Democrats.

Trump said at a rally in North Carolina: If [Hillary Clinton] gets to pick her judges, nothing you can do folks. Although, the Second Amendment people, maybe there is.”

Many criticized him appearing to suggest violence against Clinton, but he later explained that he was trying to say that Second Amendment supporters would vote against Clinton.

Greta Van Susteren highlighted a comment that then-Senator Barack Obama made in 2008 about doing things the “Chicago Way.”

Obama also joked about rubbing out his opponents #TheChicagoWay:"If they bring a knife to the fight, we bring a gun,” #Obama, Philly, 2008

I’m sure I’m in good company when I say that I find what Obama and Hillary (click here to hear her insane comment about guns and assassination) to be not only two faced, but also insanely offensive to gun owners and all Conservatives. We are constantly BOMBARDED with rhetoric from the left saying that we are the violent ones, that we are unstable, and that we cause all the problems. NEWS FLASH: it’s just the opposite. Look at all the protests you can find on YouTube outside of Trump rallies. You will never see a Conservative throwing the first punch, it’s always the Liberal antagonists causing the problems, and liberal cities with the vast majority of gun crime in this country.

This is just more proof that another 4 years of Democratic, Liberal bulls*** is exactly the opposite of what the country needs.