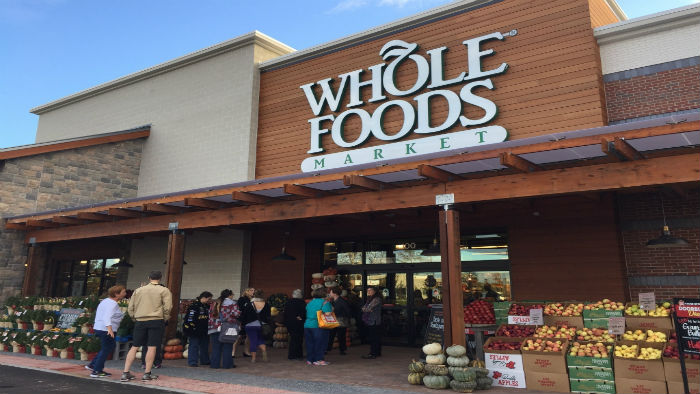 Ah, Whole Foods. Millennials and liberals itching to overspend on common items flock to the store in droves. You might that think that a company that depends on its customer’s willingness to pay more for “premium” products would have a better customer service department than the local Walmart.

Well, you would be wrong.

In an awesome viral letter a disgruntled former shopper explains what happened to his wife when she placed a carton of water bottles under her cart.

I consider myself to be a loyal Whole Foods customer. In fairness, it’s my wife who is the customer, since it is she who actually frequents your stores and spends the money… Someone over there has to be making a bit of coin on our visits, although admittedly, I’m not up on the current margins for quinoa sales.

That’s why it was so shocking to me to learn that she was arrested by your staff during her last visit to Whole Foods.

Arrested, you might ask? Well, it seems that way. And the crime? She “stole” a case of water.
Admittedly, I feel somewhat responsible for this “theft” since I’ve been putting a lot of pressure on her to stockpile water bottles. I’ve been very thirsty lately. I’ve had many sleepless nights craving my water from Whole Foods. But, alas, the other night, when I groggily made my way to our kitchen pantry at 3AM, we were out of those sacred bottles. Imagine my outrage… this was the final straw! In a desperate attempt to quench my insatiable thirst, I told her: “Honey, you are going to have to do better with the shopping. We need more Whole Foods water bottles. I don’t care how you get them – just get them!”

The next day, a plot was hatched. My wife set out to “steal” water bottles from Whole Foods. Brilliantly disguised as an everyday shopper (pushing a cart around, sampling items, making purchases and all those things normal shoppers do), my wife surreptitiously took a water bottle case and stashed it underneath her cart, masking it with the only available “cover” she had – her gym bag. Her true genius on full display, she filled her shopping cart with another $180 worth of “decoy” shopping goods, (which of course she would pay for in full), all in a clever attempt to draw people’s attention away from the real prize. The crown jewel. A $5 case of Whole Foods water. Palms and brow billowing with sweat, she made her way to the cashier, as the final stage in her plan – the escape – was now well within grasp. Just beyond the register, she could see her freedom – and a life of endless amounts of Whole Foods water (or at least a few days worth).

But, my dear Whole Foods executives, it was not to be. On this fine day, one of your crafty security guards would foil the plan. Drawing from his many weeks of in-classroom training in the art of thwarting dastardly acts such as “stealing water bottles”, “eating food from the coveted salad bar while still shopping”, and “using expired coupons”, his spidey senses went off the minute she walked into the store. And why wouldn’t they go off? After all, it is rare that you would see a shopper who has been in your store 27 times in the past month and a half come back again to do more shopping the next day (hmmm, wait a minute…?). Ducking behind the deep freeze, dropping-and-rolling around the fresh produce, and using the mixed nuts section as camouflage, our Whole Foods SWAT team member stalked his prey, patiently waiting for the opportune moment to strike.

Once my evil-doer wife passed the register while paying for all of her groceries, except the Whole Foods Holy Water, your faithful security guard pounced. Accosting her in a crowded elevator in front of 15 other customers (accomplices perhaps?), he loudly (and proudly) proclaimed, “Miss, you are under arrest. You stole water from us and I am going to have to take you in.” I kid you not, the lad said “take you in”. Beaten at her own game, my wife had to think on her feet. Under pressure, and furious about the situation, all she could muster was: “Oh shit, I totally forgot about that. It was hidden under my gym bag. Here’s five bucks – I’m so embarrassed and I really do apologize.”

Now, whole foods executives, both of us know just how ridiculous that excuse sounds. We all know that’s COMPLETELY implausible. Especially to customers who shop every day and have a zillion other things going on. It should be patently obvious to anyone that reads this that my wife hatched a plot to steal $5 worth of water, and was caught red-handed.

My only relief is that your able-bodied staff properly resolved the situation. After keeping her under “lockdown” for a half hour, interrogating her about her motives and plans for future attacks on Whole Foods (thankfully, she unleashed her fury on Whole Foods as an “independent”, with no direct ties to Al-Qaeda, ISIS or any other terrorist organization), they let her go. And, in a strangely ironic twist, they gave her the water bottle case for free. I crack myself up every time I re-read that sentence.

But there’s one more catch. I consider it my own consolation prize.

The catch is that before she was allowed to leave, the kind staff at Whole Foods told her she’s never allowed to shop there again. Phew, what a relief! Now I can take my $30K per year food budget to one of your competitors, where, I’ve been most pleased to discover, a dollar is stretched to a far greater degree.

And, they have such great deals on cases of water. They are a practical steal!

Yours truly and truthfully,