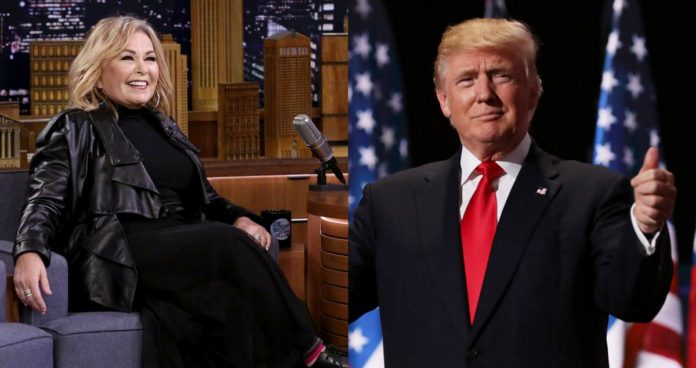 The much-anticipated reboot of the ‘Roseanne’ show was an unqualified success. Not only did it break records, drawing over 27 million pairs of eyes, but it beat out many of its competitors in the same category.

The show’s conservative bias, brought to us in part by Roseanne herself, caused quite a stir in Hollywood. Her outright support of the current Commander-in-Chief is a rare thing in the entertainment industry, and therefore the topic of conversation in every interview that ‘Roseanne’ star and producer, Rosanne Barr, does.

According to the Daily Mail Barr was pushed to defend her choice to openly support President Trump in an interview with late night host Jimmy Fallon.

Fallon congratulated Barr on the outstanding ratings for the Roseanne show’s reboot but quickly noted that many aren’t happy about her success, due to her support of the President.

“I mean, everybody had to choose for themselves, according to their own conscience, who they felt was the lesser of two evils.

“You know, everybody chose that, so I’m not going to put anybody down who didn’t vote like me. This is America, it’s a free country, and when you weigh it all together, I just felt like we needed a whole new thing. All the way. Bottom to top.”

Barr also took the time to address the fact that her own political feelings and the ones of her character don’t have to be the same. She says that she made this about staying true to what she believed the fictional Roseanne Connor really would have believed in.

While Barr’s character on the show voices her concerns about jobs, the economy, and healthcare, in real life, Barr has concerns that spread outside from sea to shining sea. She is a strong supporter of Israel, due to her own ethnic background, and felt the need to voice her heartfelt thanks to President Trump for stepping in on Israel’s behalf.

“I said, ‘Mr President, on behalf of my mother, I want to thank you… for moving the embassy to Jerusalem. Thank you so much,” she said.

Barr had mentioned in an earlier interview that the President himself had called her to congratulate her on the incredible ratings that ‘Roseanne’ had received.