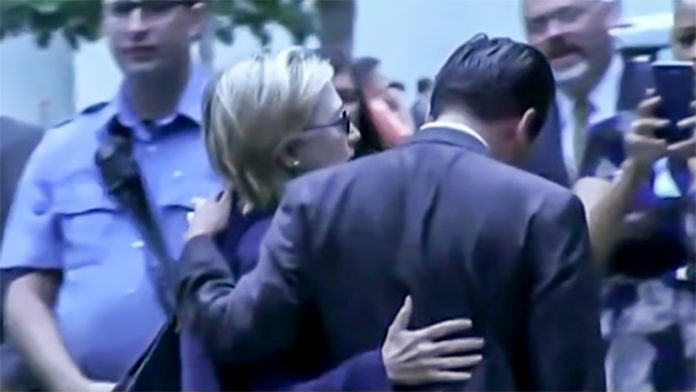 With the liberal media bending over backwards to hide Hillary Clinton’s medical conditions and her lies about it, it’s almost comical to see her getting called out on her obvious falsehood to the American public.

Today, at the 15th anniversary of the September 11th attacks in New York City, Clinton was rushed away, as she nearly collapsed, slumped over, and lost a shoe.

Here she is stumbling into her van, being helped by multiple Secret Service Agents:

Hillary Clinton had a “medical episode” that required her to leave a 9/11 commemoration ceremony early, a law enforcement source who witnessed the event told Fox News.

The Democratic presidential nominee appeared to faint on her way into her van and had to be helped by her security, the source said. She was “clearly having some type of medical episode.”

Clinton’s stumbled off the curb, her “knees buckled” and she lost a shoe as she was helped into a van during her “unexpected early departure,” a witness told Fox News.

Not only is the liberal media not reporting on this despite it going viral on Twitter, there are reports that the media is actively trying to cover this event up as quickly as possible, according to one of our favorite political critics, Paul Joseph Watson:

No matter what the liberal mainstream media says, it’s all there on video. Hillary is in a bad way and unfit to be President, both morally and physically. We can no longer sit by and watch the media try to play us for fools. In November, we have to make sure no one ever hears the name “Hillary Clinton” in politics ever again.

We have the power. We can do this.