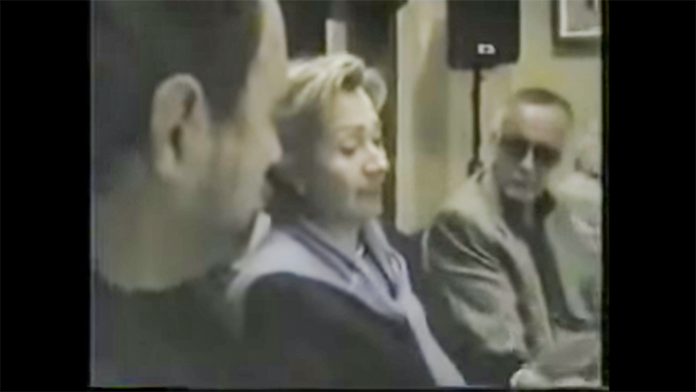 Remember, in the first Democratic debate, when the father time stand-in also known as Bernie Sanders said “we’re tired of hearing about your damn emails?” Yeah, that was wrong, as the FBI are anything but tired when it comes to matters of national security, and doubly awake when it that issue has to do with someone running for the highest office in the land.

Thankfully, we’ve uncovered a hidden camera in an ABC News segment that proves that not only did Hillary know about her wrongdoing, but she was actively trying to hide it, amongst other things, like exact amount of campaign contributions.

According to ABC News, Clinton is seen interacting with a contributor to her campaign by the name of Peter Paul. She is seen having dinner with him, laughing, and disclosing that she has stopped using emails because the FBI has been investigating her to no end. This flies in the face of her making the case that she had no idea what was going on.

In addition, Peter Paul contributed more than a million dollars to the campaign – no small chunk of change in anyone’s eyes, but according to Hillary, she only disclosed less than half that amount to the IRS. One can only imagine what she did with that money. We’re putting out money on her putting it in her pocket. But that’s none of our business, right?

Here’s the video, you can see for yourself how much of a lying shrew Hillary really is:

The Clintons are absolute crooks.

Here is the entire segment: