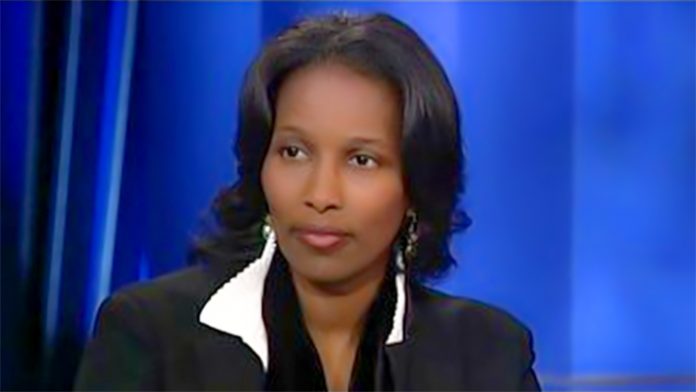 It’s no secret that the leftist liberals believe themselves to be champions of peace, love, tolerance, and equal rights for minorities and women. In reality, they are the exact opposite of all of those things.

Ayaan Hirsi Ali is a woman’s rights activist. You’d think she would be aligned with the left’s agenda and opinions right? She was also raised Muslim so that’s more evidence to the fact that she’s a radical leftist right? Wrong. Totally wrong. She has grown up seeing the evils and backwards ideology of Islam as a whole. And now she’s PISSED and is speaking out about it after the London terror attack.

Forget every American, ever person on EARTH needs to hear this one.

Ayaan Hirsi Ali criticized what she considered the “apologetic attitude” some liberals around the world have toward identifying the religious component to Islamic terrorism.

Ali, a women rights activist who was raised Muslim in Somalia but later became an apostate, called such a mindset “masochistic and stupid.”

She said on “Tucker Carlson Tonight” that radical Islamic terrorists “don’t go to liberals and say thank you so much, we’ll stop terrorizing you” because of some on the left refuse to identify terrorism’s religious component.

And that’s the mentality of the left. The way liberals do business is not working and it’s showing by having radical Islamic terrorists continually attack our cities and people.

Islamists only seek a Sharia-compliant world, Ali said, in the wake of Wednesday’s attack in London, a city with progressive leadership, “and whoever is in their way is their enemy.”

Carlson said terror groups believe Westerners do not have moral standing to critique Islam, and Ali agreed, adding that they sometimes will consider fellow Muslims illegitimate if they do not comply with their belief system.

So when the left says that this is only a “lone wolf” or an “isolated incident” remember to ask them this question when they do: what group of people in the world do you think of when you say the word “terrorism?” Radical Islam should be the answer there. When an entire group is best known for terrorism rather than peace, it’s time for wholesale reform of the entire group.

Islam is not compatible with western society. GET A FREAKING CLUE! Our thoughts and prayers are with those in London today after yet another Islamic terror attack. We have the power to stop it. Don’t let this become the normal.