Fidel Castro has been at the head of the Cuban government for as long as we can remember, finally giving the reigns over to his brother Raul a decade ago. Obama’s historic Cuba visit marked the first time an American President visited the communist island in many decades.

With this visit, came a promise from Obama for a brighter tomorrow for Cuba and a greater partnership with the offshore nation.

However, Fidel Castro wasn’t having it, and he let Obama know EXACTLY what he thought, in a 1500 word essay titled “Brother Obama”.

According to ABC News, 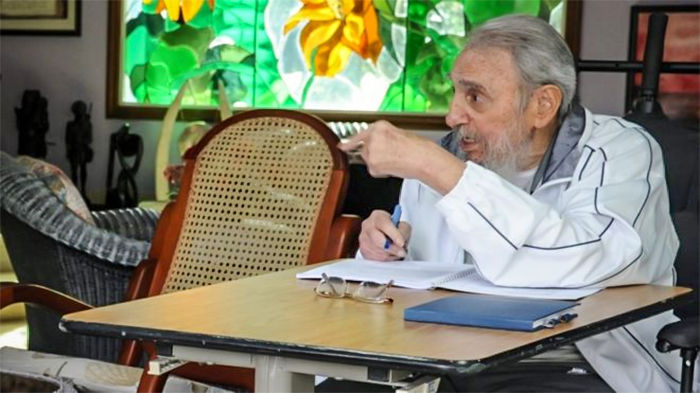 The 1,500-word letter in state media titled “Brother Obama” was Castro’s first response to the president’s three-day visit last week, in which the American president said he had come to bury the two countries’ history of Cold War hostility. Obama did not meet with the 89-year-old Fidel Castro on the trip but met several times with his 84-year-old brother Raul Castro, the current Cuban president.

Obama’s visit was intended to build irreversible momentum behind his opening with Cuba and to convince the Cuban people and the Cuban government that a half-century of U.S. attempts to overthrow the Communist government had ended, allowing Cuban to reform its economy and political system without the threat of U.S. interference.

Fidel Castro writes of Obama: “My modest suggestion is that he reflects and doesn’t try to develop theories about Cuban politics.”

Castro, who led Cuba for decades before handing power to his brother in 2008, was legendary for his hours-long, all-encompassing speeches. His letter reflects that style, presenting a sharp contrast with Obama’s tightly focused speech in Havana. Castro’s letter opens with descriptions of environmental abuse under the Spaniards and reviews the historical roles of Cuban independence heroes Jose Marti, Antonio Maceo and Maximo Gomez.

Castro then goes over crucial sections of Obama’s speech line by line, engaging in an ex-post-facto dialogue with the American president with pointed critiques of perceived slights and insults, including Obama’s failure to give credit to indigenous Cubans and Castro’s prohibition of racial segregation after coming to power in 1959.

Quoting Obama’s declaration that “it is time, now, for us to leave the past behind,” the man who shaped Cuba during the second half of the 20th century writes that “I imagine that any one of us ran the risk of having a heart attack on hearing these words from the President of the United States.”

Castro added that the island has basically been self-sufficient for the last 50 years, and doesn’t suddenly need help from the US now:

The focus on U.S-Cuba business ties appears to have particularly rankled Castro, who nationalized U.S. companies after coming to power in 1959 and establishing the communist system into which his brother is now introducing gradual market-based reforms.

“No one should pretend that the people of this noble and selfless country will renounce its glory and its rights,” Fidel Castro wrote. “We are capable of producing the food and material wealth that we need with with work and intelligence of our people.”

Here’s the cringe-worthy first exchange between Raul Castro and Obama:

I understand the need for diplomacy, but it’s clear that Obama is paying lip service to an ideal that he doesn’t give two cold craps about. What do you think? Let’s hear it in the comments!