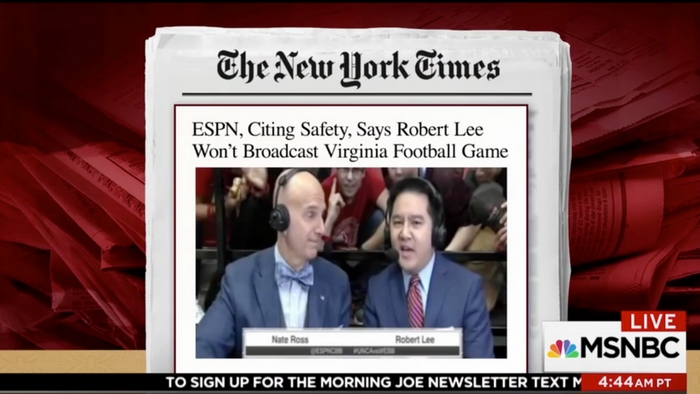 The path of political correctness has led us so far astray that we’re faulting people for absolutely everything now. What started out as a way to keep discrimination from growing, has become an excuse to discriminate. From college campuses to the houses of congress, you can be shot down for saying almost anything, just because someone says that it’s rude (or racist, or sexist, or cultural appropriation, and the list goes on).

As it turns out, your job isn’t even safe if you’re a minority who happens to have a name that might trigger someone. ESPN sports caster Robert Lee is the latest victim of political correctness gone amok. His previously scheduled coverage of a game in Charlottesville was yanked since the childish fit throwing that we’re now calling “social protest” of a couple weeks ago in Charlottesville continues to haunt us.

For the record, you know you’ve gone too far when even MSNBC thinks that you’ve crossed a line. Obviously, ESPN feels the need to address social issues, but I’m gonna say that this one was a swing and a miss.

Even the anchors on MSNBC’s “Morning Joe” are making fun of ESPN for pulling sportscaster Robert Lee from broadcasting a football game in Charlottesville.

As cohost Willie Geist introduced the story, the guests on the show could be heard chuckling in the background.

Reading from ESPN’s statement about the decision, where ESPN said “we regret that who calls play by play for a football game has become an issue,” Geist laughed, “it wasn’t an issue for anyone until that statement went out.”

“I’m trying to even imagine the scenario where it’s kickoff time in Charlottesville and there’s Robert Lee, looks like about a 30 year old sportscaster…and anybody has any objection to that,” MSNBC’s Steve Kornacki said.

“I guess this is the logical outcome of the culture we’ve created,” Geist said.

“Actually it’s not logical at all,” The Washington Post’s Eugene Robinson declared. “This is why Donald Trump has that 33 percent.”

The first thing to address; are we really willing to tick off the Asians? So far this thing has been strictly a black and white issue. Even the Latinos seem to be sitting this it out (probably babbling about loco gringos, which we completely deserve), but now ESPN has decided to pick on the Asians. According to Wikipedia “In the United States during the year 2000 census, ‘Lee’ was the 22nd-most-common surname.”

The sad thing is that even MSNBC can tell that it’s insanity like this that made the nation withdrawal from the liberal party line and cling to President Trump. We, as a nation, have to have a lot of motivation to get up and change the status quo, but dealing with the increasingly stifling PC climate did it. Our rights are being taken away at even the whiff of trouble making by idiots without jobs, and that just doesn’t work for us.

Maybe ESPN should stick to sports, and let politicians stick to politics. I, for one, would enjoy my weekends a lot more if they did.