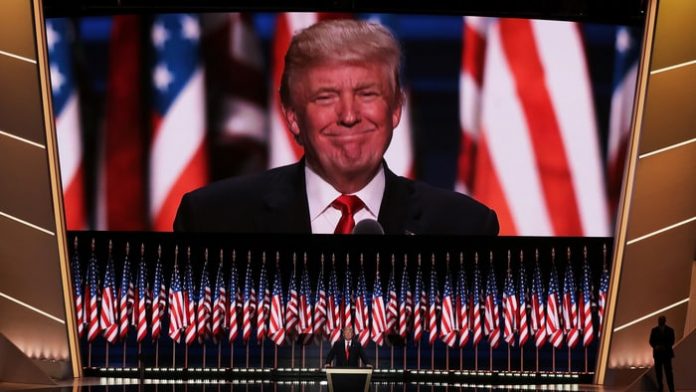 When people look back to one point in Trump’s presidential run, they’re going to try to pinpoint the exact moment when he became presidential. I think we saw it last night during his speech officially accepting the Republican nomination.

But that’s not the part people will remember. What will go down in the history books I’d that even in one of the proudest moments of his life, his hard work realized, he STILL was thinking of America first and told Obama and Hillary on live TV that their reign of incompetency was over.

Here are some of the best excerpts:

“I have a message for all of you: the crime and violence that today afflicts our nation will soon come to an end.”

“After fifteen years of wars in the Middle East, after trillions of dollars spent and thousands of lives lost, the situation is worse than it has ever been before. This is the legacy of Hillary Clinton: death, destruction, terrorism and weakness.”

“to every last person threatening the peace on our streets and the safety of our police: When I take the oath of office next year, I will restore law and order to our country.”

But my favorite line was where he took Obama OUT!

“THe irresponsible rhetoric of President Obama, who has used the pulpit of the presidency to divide us by race and color, has made America a more dangerous environment for everyone.”

“Every action I take, I will ask myself: Does this make life better for young Americans in Baltimore, Chicago, Detroit, Ferguson who have the same right to live out their dreams as any other child in America?”

Here is the speech, in full. Don’t miss a second: