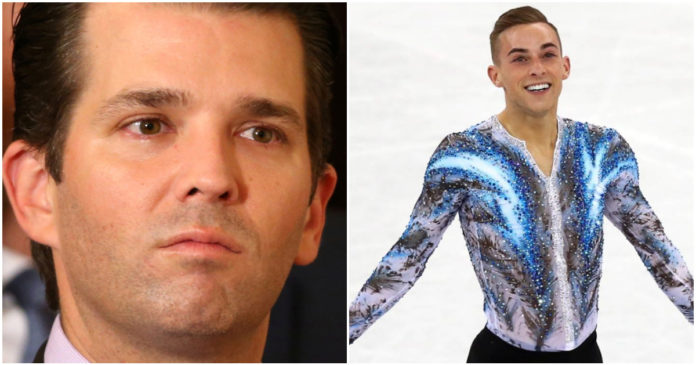 It should come as no surprise that the 2018 Winter Olympics are already marred by political controversy. In the lead up to the games, one of team US’ athletes initiated a conflict with VP Pence over his stance on gay issues.

While Pence has been mum on the issue, an ally has emerged in this strange public spat.

As reported at the New York Post, Donald Trump Jr. has waded into the feud between gay Rippon and Vice President Mike Pence. Trump Jr. didn’t like that way Rippon tried to say he didn’t want his Olympic experience to be “about Mike Pence” after one of his early performances, seeing how it was Rippon that went to the media to trash Pence for his supposedly backward beliefs about LBGTQ+&#)@%^ issues in the first place.

“Really?” Trump Jr. retorted. “Then Perhaps you shouldn’t have spent the past few weeks talking about him. I haven’t heard him mention you once???”

In the weeks leading up to the games, Rippon was keen to get in front of any camera to bash Pence for his role in leading the US Olympic delegation during the opening ceremony. Pence even tried to meet with Rippon privately after the skater criticized his bigoted views about gays, but the VP was rebuffed, which Rippon then bragged about to the media.

“You mean Mike Pence, the same Mike Pence that funded gay conversion therapy? I’m not buying it,” Rippon told USA Today, among other things. For some reason, Rippon and leftists don’t like providing counseling to gay people who want to overcome their homosexuality.

After weeks of talking about Pence, Rippon was asked about the VP after his performance in a team skating event, to which he said he didn’t want his games to be about him.

“I don’t want my Olympic experience being about Mike Pence,” he said.

“I have no problem about what I’ve said because I stand by it, but I think right now the Olympics are about Olympic competition.”

Well, it’s far too late to be saying that now, as you intentionally made it about him and yourself, so you could steal the spotlight and make a bigger name for yourself. It’s incredibly disingenuous of Rippon to spout such nonsense after he’s the one who kicked off this entire ordeal. Just maybe he’ll keep his mouth shut and walk the walk from now on instead of flapping his gums at every camera he sees.