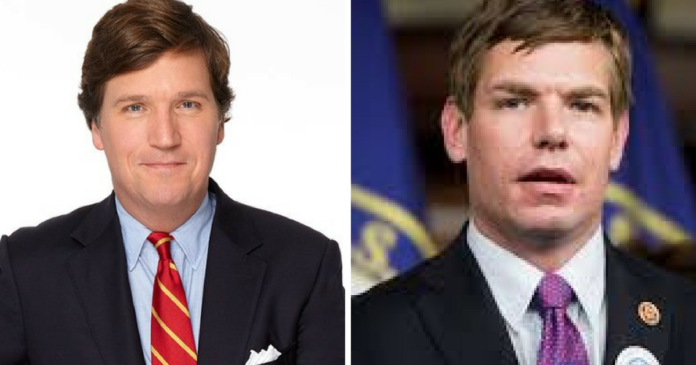 Fox News’ Tucker Carlson and California Rep. Eric Swalwell squabbled over the Russia investigation Monday. Swalwell tried to pretend to the investigation was reasonable and Carlson immediately shut him down.

“Do you know that for a fact?” Swalwell said.

“Okay, maybe Mueller’s in contact with the Russians, but Trump didn’t come up with those from the Russians, so that didn’t happen,” Carlson said.

“There is still an attempt there, right? You can attempt to do something and fail, and it can still be a crime,” Swalwell said.

“I hate to inject common sense into this… If you’re trying to make secret contact with Russia, your handlers back in Moscow, wouldn’t you dial them up on the short wave in the basement? Would you really sent a coded message in the middle of a joke at a press conference?” Carlson responded.

“I’m not saying he’s the smartest guy in the world, Tucker. Never accused him of that,” Swalwell said.

“So that’s — that’s the smoking gun right there?” Carlson said.

“No, it’s part of the evidence. An invitation made by the candidate, telling them it’s okay. He’s not the smartest guy in the world,” Swalwell answered.

“Okay so, he’s both a secret agent for Putin but he’s so dumb he spills his secrets at a press conference on TV.”

Carlson tried to do the impossible- he tried to inject logic into a conversation about Russia. Democrats have completely lost their mind. They’re buying into the witch hunt completely. Swalwell took his humiliation well, he didn’t even falter in his beliefs.