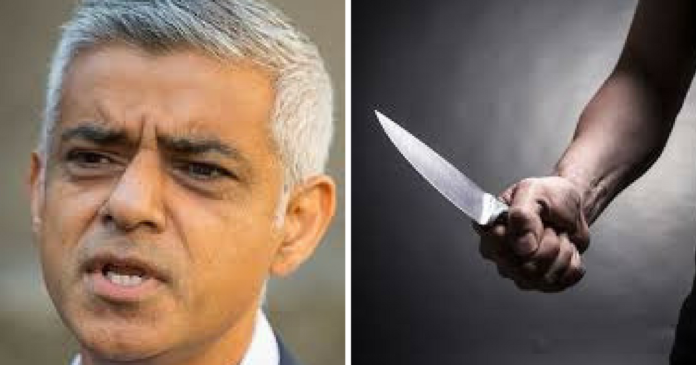 London is grappling with a severe surge in violent crime. Mayor Sadiq Khan is dealing with the problem in the typical liberal fashion. Guns are already outlawed so Khan decided to implement a knife ban.

It’s ridiculous. Khan plans to have London’s police force waste their time by stopping and frisking anyone who looks like they might be carrying a knife. It’s understandable that he’s desperate to quell the violence but he’s going about it the wrong way.

“No excuses: there is never a reason to carry a knife. Anyone who does will be caught, and they will feel the full force of the law,” Khan tweeted.

The violence is all knife-related. Access to firearms is heavily restricted by British government so people have turned to stabbing each other instead.

The city has witnessed 50 murders already this year. In February and March, the murder rate surpassed New York City.

“While I understand that police are facing emerging threats and new pressures—leading us to increase total investment in policing—the evidence does not bear out claims that resources are to blame for rising violence,” Home Secretary Amber Rudd admitted.

City officials blame the spike in murders on gang violence. Whatever the reason, it shows that trying to ban weapons doesn’t eradicate violence. If people don’t have access to guns, they’ll turn to knives when they want to harm someone. Without knives, they’ll turn cars or bombs or acid.

The only way that society can stop violence is to do a better job creating sane, happy people. Most of the people committing violence in London are angry young men.

In other words, the people of London are not allowed to protect themselves.
England, londoners you don't have a knife problem. You have a mayor problem, PC problem, liberal agenda problem. Don't be fooled by this rhetoric. If it's not knives it's cars. You Can't Ban everything. pic.twitter.com/neKzIt42tE