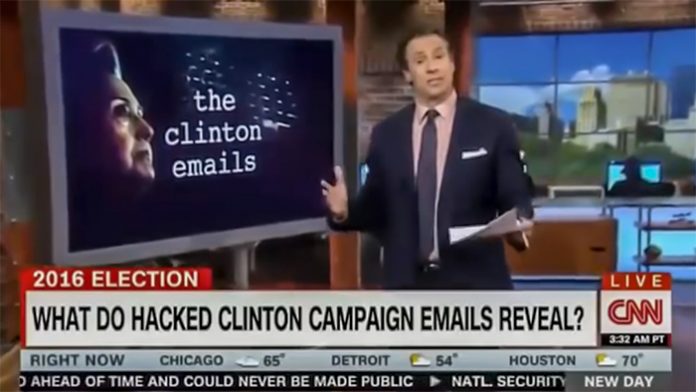 In this election cycle where sides are more polarized than ever, it’s important that media organizations remain impartial and just give you the facts so you can come to your own conclusions.

Nah, I’m just kidding. In this election, the mainstream media is doing everything it can to destroy Donald Trump and hide the countless crimes of Hillary Clinton, and there is perhaps no better example than what CNN just announced.

Wikileaks released hundreds of Hillary’s deleted emails and it can and will spell disaster for her campaign, but CNN, also known in some political circles as the “Clinton News Network,” has announced that the possession of these emails is illegal for anyone other than the media, so the public has no choice but to listen to whatever the media tells them.

That is utter and complete bulls**t. The press isn’t some magical entity that gets to have access to confidential information that was made available to the public, and there is no reason why CNN has to be the arbiter of information. They are simply lying to the American public and they no longer care that they’re being called out on it.

Here’s Wikileaks response, calling CNN out for their lies:

There’s three weeks until the elections, and plenty more emails to release, so we can’t wait to see how badly Hillary gets beaten in November.