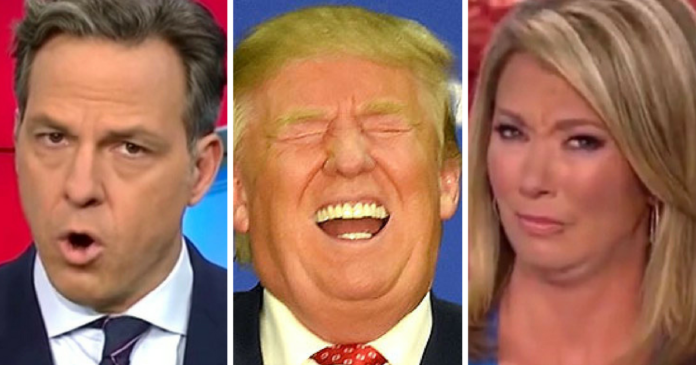 CNN’s abysmal year is getting worse.

Jake Tapper, the network’s “superstar”, has already lost his luster. Last year, Tapper was averaging a respectable 1.09 million viewers. A pittance compared to other news networks, but decent for CNN.

However, his star is already faded. This year, his numbers have tanked by a third. Just 785,000 are tuning into his drivel. In a May 2017 press release, CNN bragged that Tapper “was #1 in cable news this month in the all-important demo 25-54… ranked #2 in total viewers, easily topping MSNBC.”

The glory was short-lived. As far content, MSNBC is even more offensive and nonsensical than CNN. However, MSNBC’s strident tone is at least interesting. Host Rachel Maddow rarely says anything of value but she says everything with conviction.

Tapper was a star before he joined CNN. He was actually known for his independent views, his refusal to cow to the liberal machine. CNN drained his soul, however. The network purposefully diluted his spirit so his show became the same bland nonsense that CNN airs every other hour.

Nobody should be surprised. CNN has been struggling to remain relevant for a while now. Its frothy brand of fake news isn’t appealing to anyone. People who actually want to know what’s happening in the world watch Fox News. People who want to be entertained by lies about the president watch MSNBC. That doesn’t leave a lot of viewers for CNN.

Tapper is going to have a hard time pulling his ratings out of the toilet. If anything, his ratings are just going to get worse.