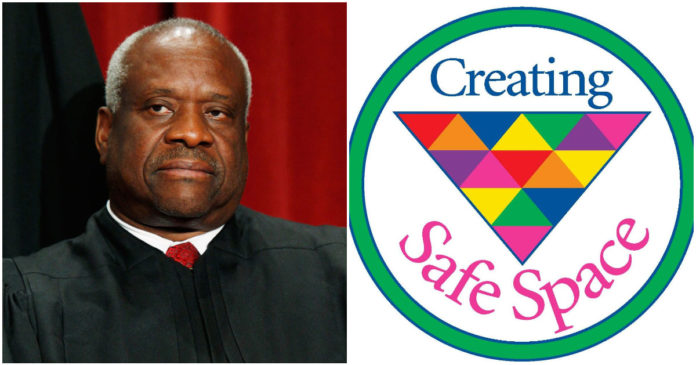 In the year 2018, there are few things that don’t trigger leftists. We’re living in an age were college kids have rooms set aside for them to cry and feel “safe” in whenever even the most moderate conservative speaks on campus.

Leftists throw fits of rage at the mere mention of Trump, lashing out and calling everyone that disagrees with them racists, bigots, fascists, etc. It’s a 24/7 Oppression Olympics, to see who can be the bigger victim and elicit the most likes and tweets on social media. It’s culturally corrosive, and one of the few remaining shining lights in our government condemned this cultural atrophy during an event Thursday.

As reported at the Daily Caller Supreme Court Justice Clarence Thomas has denounced the victimhood seeking culture we’re suffering in during a sit down at the Library of Congress.

“At some point, we’re going to be fatigued with everybody being a victim,” he said while discussing his life. Thomas recounted to the audience his rise from Georgia’s coastal lowlands among impoverished Gullah-speakers, where spent his childhood working his grandfather’s farm, to the Supreme Court. He likened his upbringing to Kathryn Stockett’s 2009 novel “The Help” as most of the women in his life, including his mother, were domestics in white households.

Unlike his left-wing compatriots, Thomas didn’t spend his time cursing whitey or “structural racism” for his lot in life.

Thomas has been a target of the Left for decades, as he’s been labeled an “Uncle Tom” and “House Negro” for his conservative politics. He was even the actual victim of a smear campaign during his confirmation hearing, which saw him falsely accused of sexual harassment.

The way he’s been treated over the years is one of the best examples out there of the Left’s racism. If you’re a non-white conservative, you’re trash in their eyes and a target for transparent racist attacks.

Thomas, like his economist counterpart, Thomas Sowell, hasn’t received the recognition he’s deserved thanks to his non-liberal politics. While that’s a shame, it won’t change the fact that he’s an intellectual giant, nor disgrace the decades of his Constitutional defense. We may be living in a snowflake culture, but one day, Thomas will get the credit and respect he’s due.