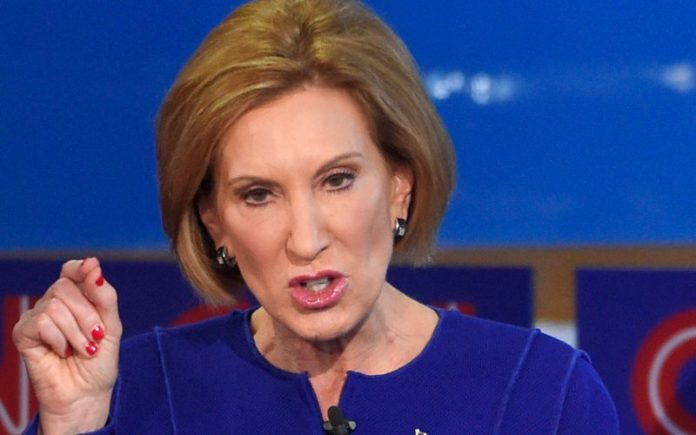 As quickly as Carly Fiorina was in and out of the race both in the beginning and as Ted Cruz’s running mate, some of her words did hold some value. What she just said about Hillary Clinton is easily her greatest political stand she’s ever made.

As we learn more and more about Hillary’s email scandal and the FBI saying there will be no charges [Editor’s note: to us that’s essentially a Hillary for president endorsement], everyone on the Republican side has had something to say. Donald Trump’s reaction was one of our favorites, but this one by Fiorina is easily the best thus far because it doesn’t just call out Hillary. It calls out the whole system and that today was a dark day for American Politics.

Today, the FBI admitted that Hillary Clinton endangered the American people—and confirmed that the worst things any of us imagined about Hillary’s email server were true.

He admitted that no reasonable person could have believed putting these emails on a private server was at all appropriate or acceptable.

He admitted that 110 emails on the server were classified at the time they were sent—showing that Hillary not only lied, but knowingly endangered national security as Secretary of State.

He admitted that Hillary deleted work-related emails before turning them over to the State Department, despite her claims otherwise.

And most shocking, Mr. Comey even admitted that it’s likely foreign governments hacked her emails–and that our adversaries could know critical secrets about the U.S. government because of Hillary’s actions.

But when you’re a Clinton, none of this matters. Not when you have the ear of the President, or you can call a secret airport meeting with the Attorney General. Not when you behave as if you’re above the law, and will never be held responsible for your actions.

Mr. Comey admitted that someone caught in a similar situation would “often” be punished. And yet, he announced the FBI would not recommend criminal charges for Hillary Clinton.

It’s not just a miscarriage of justice, but a blow to the very heart of our democracy. This is a shameful day for the rule of law and the security of our nation, no matter what your political beliefs may be.

The Obama Administration might be circling the wagons, and doing all they can to prop up their corrupt, incompetent, untrustworthy Democratic nominee—but the American people know better. And if our government won’t make her face consequences, voters will.

What Fiorina has said here is nothing short of perfection. The last line is of particular poignancy. If the government won’t stand up to Hillary, then America will. She’s insinuating voting for Donald Trump as make up for this and we think that’s a great idea, but don’t vote Trump just because Hillary is the opposition. Trump’s policies are sound and will make America better. Fiorina sees that and she also sees that we need a MASSIVE change.

To keep things like this from happening again, Trump is the answer.