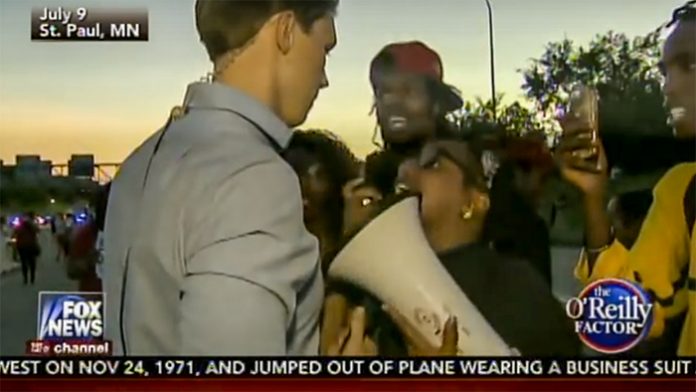 Oh man. Black Lives Matter just keep digging themselves into a bigger and bigger hole. Every time these morons speak, what comes out is nothing but racism, inequality, and segregation. Thinking that this group helps this country’s racial divide is complete fantasy.

So imagine our surprise, or lack there of, when we spotted this video of a Fox News reporter being verbally, then physically assaulted when he went to cover a BLM rally.

Does this sound familiar? Sounds a lot like liberal protesters at Trump rallies doesn’t it? This is the side of the radical left that no one wants you to see.

Not representative of the BLM movement? Have you seen them protesting before ma’am? Did you know their actions and racial bigotry got five innocent police officers killed in Dallas?

These people are just making things worse. If you want true equality, work hard, get out of the thug and hood mindset, and stop blaming society for your problems. You were born in a country that allows you to do whatever you want and become anything you want.

If you want to be lazy and blame everyone else for your own problems, then nothing will ever happen and you’ll perpetuate the same garbage that’s been happening to you for decades.