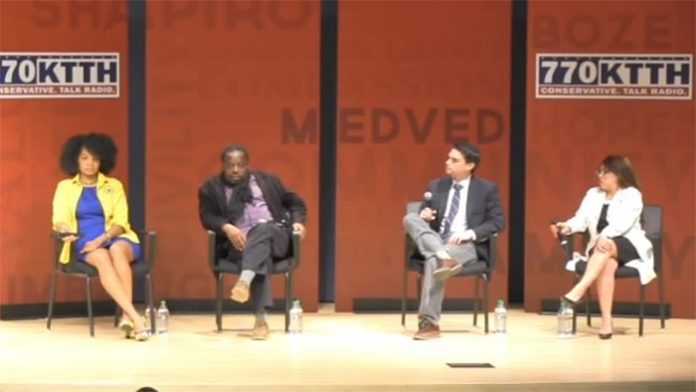 The problem with Black Lives Matter is that they don’t know what their organization stands for anymore. Originally, it was, in theory,  to bring attention to the struggles in the black community. This was back in 2013. Since then, it’s morphed into a group that spreads hatred and bigotry against other races by saying that ONLY black lives matter. News flash, all lives matter.

But BLM is content to continue their path of destruction and racism until their voices are raspy from screaming so much. Luckily, we have patriots like Ben Shapiro to help shut them the hell up. As BLM loots, riots, and pillages their way across the country every time a cop shoots a black man (while totally ignoring black on black crime, by the way), Shapiro points out the complete and utter hypocrisy with the point of it all.

And he’s right. What exactly are the riots and the extra crime sprees in the wake accomplishing? The answer to that is nothing. When a cop, black or white, shoots a black man there is always a riot now which then destroys black businesses

The core of the problem is that BLM and all their followers aren’t in control of any situation and that makes them mad. News flash again, you will never be. You can’t stop cops from shooting people when they believe them to be armed and dangerous. What people in these communities CAN do is, oh I don’t know, STOP BEING ARMED AND DANGEROUS. Shapiro notes that, but not in as man words, in the video. “Be a mensch. Be a good human being.”

If BLM would just preach that instead of all the hate, maybe they’d get somewhere. But no, they’re rather riot and yell, “Are they white?! GET ‘EM!” as if that is a solution to anything. Saying things and people are racist doesn’t solve anything either. We need a fundamental culture change from within the black community, and to end this ideology that racism is keeping them from striving, or else nothing will ever change and things will only get worse. Shapiro knows that and completely shut down any BLM argument that ever could refute that.

Shapiro’s bravery here to speak out against BLM is exactly what we need in this country. BLM must be taken down and stopped or else black Americans will continue to suffer for no good reason.