Now I’ve seen everything. Though highly reprehensible, not entirely shocking given how much Obama hates America.

Argentina’s president Cristina Fernandez de Kirchner has solid proof that Obama has tried to provide Iran with a framework to getting more nuclear weapons. The deal itself has been reported on highly, including here at Yes I’m Right, but this might be the most damn evidence yet.

Here’s what she said. 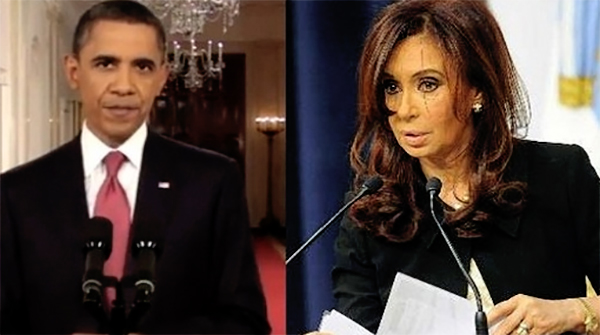 Obama will likely face more criticism after Argentine President Cristina Fernandez de Kirchner revealed in a speech before the United Nations General Assembly on Monday that a former Obama administration official tried to convince Argentina to provide nuclear fuel to Iran sometime in 2010.

In her remarks witnessed by world leaders, Kirchner recalled how Gary Samore, who once worked as the White House’s top advisor on nuclear issues, visited Argentina in 2010.

‘He came to see us in Argentina with a mission, with an objective: under the control of IAEA, the international organization in the field of weapons control and nuclear regulation, Argentina had supplied in the year 1987, during the first democratic government, the nuclear fuel for the reactor known as Tehran,’ Kirchner narrated.

Hey! Everyone in the government! Listen up. This is a world leader saying she has an eye witness account to treason and providing an unstable nation with nuclear capabilities! What more do we need. GET OBAMA OUT.