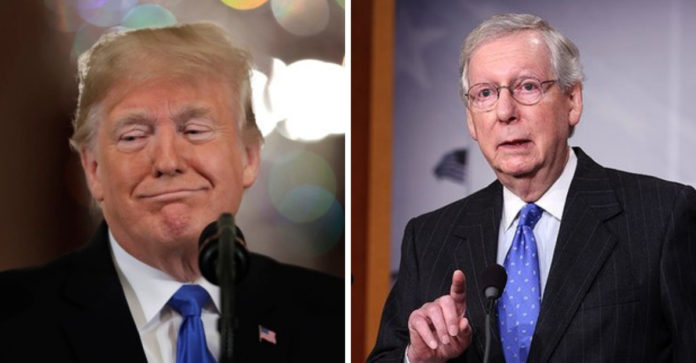 Republican Senate Majority Leader Mitch McConnell said on Wednesday that he plans to do all he can to support Trump’s border wall.

When asked how he will work with Pelosi to fund the border wall, McConnell indicated that he is dedicated to finding the funding for the wall.

“We certainly going to try to help the president achieve what he’d liked to with the wall and border security,” McConnell said when asked if he could get the $5 billion needed to build the wall.

Before the election, Pelosi spoke at the Harvard University’s Institute of Politics and said that she believes the president’s wall is “immoral,” the Daily Mail reported.

“It’s immoral, expensive, ineffective and not something people do between countries,” she said. “In any event, it happens to be like a manhood issue for the president, and I’m not interested in that.”

Pelosi was positive at the time that there was “nothing” she would trade on her agenda in order to let President Donald Trump have funding for his border wall.

However, with the issue likely part of the agreement that will fund the government, both parties will need to find some sort of agreement, to avoid a government shutdown.

The border wall isn’t the only issue that Republicans and Democrats will have to find middle ground on.
The issue of health care is one that has been at the top of the list for many voters, and Democrats campaigned on the issue prior to the midterms.

“We have to work together,” McConnell said during an interview.

“We need to improve the health care system in American because it’s not working well.”

.@senatemajldr: "We have to work together. We need to improve the health care system in American because it's not working well." @dailybriefing pic.twitter.com/7vtnj3BVZ5