Hating the President seems to be the new favorite pass time of many these days. From Washington to California, the liberals are all singing the same disturbed and angry tune.

It’s one thing to have a disagreement with the President, but there are so many who actually want to oust him, or at least tie his hands so that he can’t actually accomplish anything. The left has painted him as such a villain, that many previously undecided Americans have started to believe it. The sad thing is that the President has done everything in his power to steer away from this “big mean business man” stigma that the media has stuck him with.

Despite being stabbed in the back by many former friends from Hollywood, the President does have one true supporter in Hollywood insider James Woods. He, at least, didn’t feel the need to exchange his brain for his career while working in sunny California. 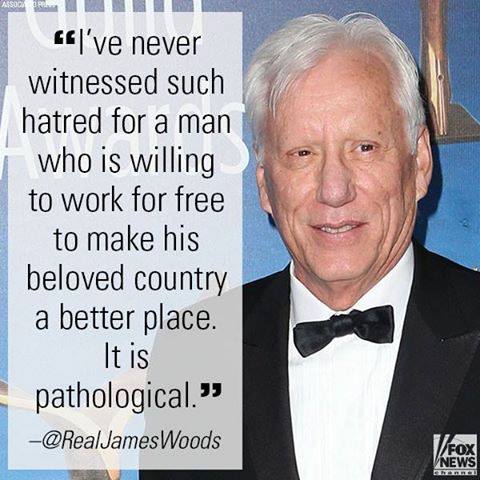 You might think that “pathological” is a little extreme, however, if we look at what pathological means, it might clear that up.

What Mr. Woods seems to be saying is that those who oppose the President are at odds with themselves, so they must be a little unhinged, it can’t be any other way. It makes no sense that people who have gained so much from the things that the President want’s to save would be so dead set against them being preserved for anyone else.

Our thriving economy has made many in Hollywood rich, and yet they’re willing to let millions who have no intention of working flood in and over burden it. The women who hold their reproductive rights so dear want to allow Islamist to push Sharia down our throats where they would have no rights at all, much less reproductive rights.

The “pathological” part could just as easily be put as “crazy” “insane” “ludicrous” etc. because when you look at the facts, none of this makes sense.