Barack Obama has made it known that he’s not interested in guns, even though his 24/7 security detail known as the Secret Service has weapons ready to fire at a moment’s notice.

Donald Trump, on the other hand, carries a gun and loves gun culture, almost as much as he loves for people to have the right to protect themselves.

That’s why at one of his historic, ground-breaking rallies earlier this month, he was given a gift of a custom AR-15 rifle by owners of a local gun store in New Hampshire called Black Op Arms.

When Black Op Arms owner Mark Limoges heard Donald Trump would be holding a rally in town, he knew just what to get him as a welcome gift: An AR-15 rifle.

“We heard Mr. Trump is excited about receiving it,” Limoges said, ahead of Trump’s Tuesday evening rally. “But the Secret Service obviously had some concerns.”

Limoges and the other Black Op Arms owners planned to present the rifle to Trump backstage, ahead of his campaign rally in a high school gym. Secret Service showed up early to secure the weapon and remove its firing pin, which makes the weapon inoperable.

The Secret Service “didn’t want to actually bring Mr. Trump to the gun store so they came today and picked the rifle up,” Limoges said. 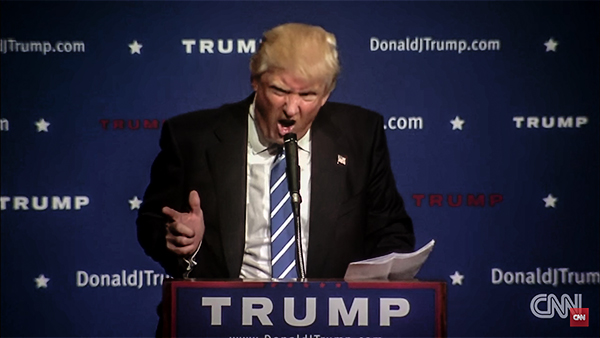 The unusual gift comes the same day that President Barack Obama rolled out a series of new executive actions designed to tighten gun rules by expanding background checks and requiring licenses for anyone “in the business of selling firearms.”

While Obama assured the public Tuesday that “this is not a plot to take away everybody’s guns,” Limoges said plenty of his customers still believe otherwise.

“Every time Mr. Obama has made an announcement like that we have definitely seen an increase in our business,” Limoges said. “People are definitely afraid about what Mr. Obama might do to take weapons away, so it’s been good for us.”

Even Trump has insinuated that Obama’s executive actions are the first step toward total confiscation.

“I wouldn’t say it would be problematic. We’re definitely for safe gun ownership,” Limoges said.

It took the Black Op Arms shop about four hours to finish Trump’s custom-built rifle. For their finishing touch, they gave it the serial number 145.

“He’s our number one choice for president and we’re hoping he is going to be the 45th president so we gave him that serial number,” Limoges said. “We just thought it would be a nice gesture.”

I can’t wait for a gun-loving President to enter the White House! Are you ready?!