Why on earth would you ever do this, in the country you live in?

In Wyoming, a principal of a high school, in his infinite wisdom decided to cancel the school’s “America Day.” It was a day where students would wear patriotic things to school including head bands, shirts, even pants, and some took it a step further and decorated their cars and lockers as well. It was a great bit of unity for the school.

So why did they cancel it? 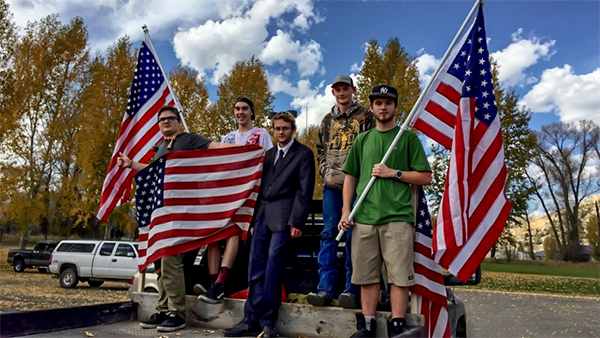 The school administration said they decided to cancel ‘America Pride Day’ because immigrant students might feel excluded. The administration decided instead to replace it with a ‘College Day’ for the homecoming festivities.

Jackson Hole High principal Scott Crisp singled out a survey as one of the main reasons for cancelling the ‘America Pride Day.’ He said:

Three times as many students indicated that they were not in support of selecting the title ‘America Day.’ I’m charged with looking at a school with 660 kids, and I have to ensure that all those kids feel part of a student body. Regardless of the name of the day, we want to ensure that activities of the week…bring our students together holistically as a student body.

No one took it lightly, especially the students who revolted and showed their patriotic sides anyway.

In response to a decision by school officials to replace a previously-held ‘America Pride Day’ with ‘College Day’ as part of this year’s homecoming festivities, a large group of senior students and some juniors protested by bedecking themselves with American flag capes, American flag headbands, American flag shorts and all manner of beautifully and garishly patriotic American flag ornamentation.

After school, one kid also drove a diesel truck around the parking lot with a bunch of American flags waving in the breeze.

What I find particularly funny about this story is that they changed it to “College Day.” Now let’s do some quick math, shall we? Given he said that his school has 660 students, if we divide that by 4 (indicating freshman, sophmores, juniors, and seniors) that gives us an average of 165 students per class-year. According to this article about Wyoming graduation rates, from the Wyoming board of education, 79% of Wyoming students graduated high school in the 2013-2014 school year.

At 165 students, that’s approximately 35 students that wouldn’t be going to college from this school. What about those kids? Were they offended when it was changed to college day? Probably not because they aren’t concerned with being PC and trying to please everyone on the planet at the same time.

This PC garbage needs to stop and patriotism should not be squelched! Fly your flags proudly America! Who is with me?