Rev. Franklin Graham is at it again and I’ll continue to sing his praises until the cows come home. This time, he tackles muslim immigration in the U.S.

Earlier this year, Graham came under fire from liberals for his radical immigration stance, saying that, “Every Muslim that comes into this country has the potential to be radicalized and they do their killing to honor their religion and Muhammad.” Well now he is backing up that claim.

Take a look at what he’s saying now that has me jumping for joy. 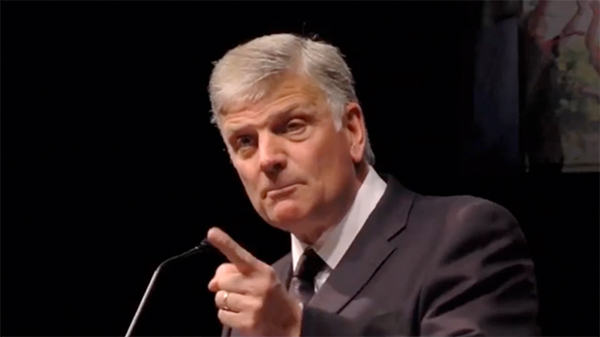 Graham went on to cite a survey that found one in four practitioners of Islam in the U.S. support suicide bombings, explaining that allowing more Muslims into the nation would only exacerbate an already brewing threat. He also said that, instead of Obama’s plan to allow thousands of Syrian Muslims to seek refuge in America, we should be welcoming the Christians and other minorities ‘being persecuted by Islam’ in that nation.

He concluded that ‘the potential for some of these people to turn on this nation for our kindness and our gratitude and commit murder’ will exist as long as the Muslim community is allowed to flourish and grow in the U.S.

Amen! And that brings about a great question: why aren’t we welcoming Syrian Christians? I blame Obama and his administration. Liberals fail and put America at risk, yet again.
(Source: Western Journalism)
LIKE US ON FACEBOOK