Illegal immigration in the United States has become a real problem lately. Not only is the fact that illegals are coming in by the millions problematic in and of itself but when they get here many are just leaning on the American welfare system to provide them with their means to live.

The other issue is that Latinos the country over have taken up the banner of their race and are completely disregarding any patriotism to their country over their loyalty to other Latinos.

Comedian and outspoken illegal immigrant supporter George Lopez has gained an especially aggressive stance against not only anti-illegal immigration policies but the American justice system in general. 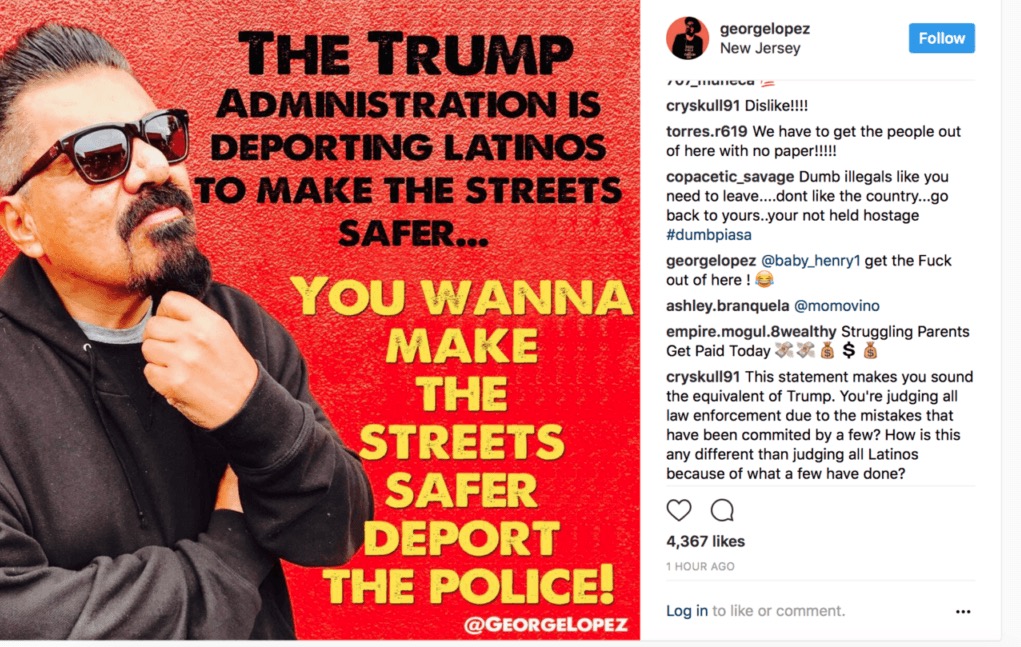 And on Twitter, some Americans took it upon themselves to correct Lopez’s statement.

George Lopez would rather keep MS-13 and deport the police. That's how stupid liberals are. That's why Trump won and will keep winning. pic.twitter.com/QaN8ZmebiH

Meet George Lopez, yes, that George Lopez. Pathetic drunk passed out on the floor of a casino. He called for police to be deported. pic.twitter.com/rv7aRqn9yJ

Didn't George Lopez promise that he was going to move to Mexico if Trump was elected? Why is he still here in the U.S.? ????????

Go ahead and add George Lopez to the list of celebrities who need to go fuck themselves.

I’m pretty sure the Latinos that the President wants to deport are those who are here illegally, and in many cases are part of gangs that continue to thrive inside our borders. And as to the hard line stance against law enforcement, I wish that just once when someone makes a statement like this they would pair it with a pledge to never call 911 in case of intruder or emergency.

Law enforcement has to use force at times, but only in retaliation to the force used by criminals. If they do it under any other circumstances, history proves that they will be punished. Judging the whole because of the actions of a disturbed few would be wrong. Just like I won’t hold the stupidity of this Latino against my Latino friends and family. That would be wrong.

A nation that can’t punish those who break their laws, and gives prizes to the ones who successfully flip the bird to the immigration policies put in place, may as well not have laws at all. Let’s face it, if I told you that you were to, under no circumstances break into my house, but if you did I’d give you $50,000 and a place to stay . . . that would kind of defeat the purpose.

Here’s another fantastic example of the stellar reasoning skills and political prowess of our buddy George Lopez.

The rank attempt at deception in this video is absolutely astounding. It’s as if nobody even cares that he’s actively trying to deceive and push a false narrative. No conservative ever has said that they want to rid the United States of Latinos. What they have said is that those who break the law should be punished, and if those law breakers aren’t American citizens (i.e. the illegal act was jumping a wall or swimming a river) then the punishment is that they get sent back home.

Adopting and over the top, and extremely transparent victim complex isn’t helping the cause at all. In fact, it is more likely to make people think that your cause has no merit at all and that you had to prop it up with lies. Oh yeah, ya did.