Nobody likes to have their noses rubbed in their mistakes, but when you make those mistakes willingly and repeatedly, it sometimes becomes necessary to demonstrate to someone that you see through their BS.

After the last few weeks that CNN has had, they seem to be attempting to keep their chin up and power through the epic bad PR they’re dealing with, but security advisor Lukács Gorka isn’t letting them forget it. Gorka is taking every single opportunity to rub it in CNN’s face that the American people haven’t yet forgotten that they’ve been caught in one too many lies and are suffering the results.

I love how Gorka keeps trolling CNN over the fact that more people watch Nickelodeon cartoon re-runs than their biggest shows. ???????????? pic.twitter.com/Km3zI9dxac

In case you’ve forgotten who all have risen above the once mighty Cable News Network, here’s a visual aid for you. 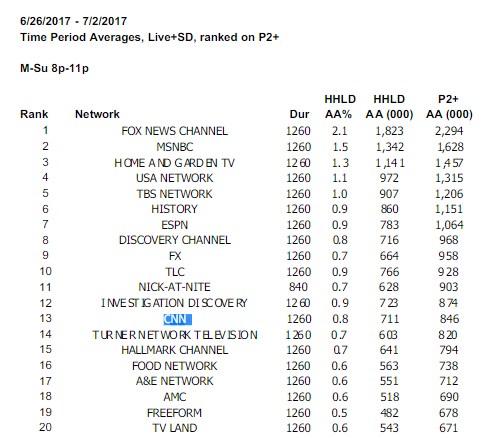 CNN has officially lost all credibility with anyone who actually wants to see things in an objective light. They seem to be employing the same method as Adolf Hitler who believed that if you tell a lie long enough people will start to believe it. We’ve learned a few things since Hitler though. We can see the tragedy that will follow if we just accept whatever a biased source tells us without regard for the repercussions.

The world watched it happen in the 30’s and 40’s as lies abounded and division grew. Sides were taken and communities split until there was so much deep seeded hatred people just accepted the copious loss of life because they’d believed so many lies about those being targeted. Kinda sounds like a certain racially divisive group that we’re dealing with today and that the media fawns all over, doesn’t it.

Make no mistake, if we allow ourselves to be lied to, someone with a mission to further themselves will come along and exploit it, and it’s only a matter of time till we’re taken in by another monster with a smooth voice and bad intentions. Props to Americans for finally seeing the light at CNN, but as our friend, Margret Thatcher would say “this is no time to go wobbly.”