Racial tensions in the United States being on the rise isn’t a new phenomenon. What is new is those who are up in arms attempting to bully white people into staying away from the college campus where they pay to attend.

As ridiculous as this may seem, it’s the real deal. Students at Washington State College wanted a day without white people, and some of the white people didn’t appreciate it. No, they didn’t flood the streets and burn things, they just showed up at school. This is what happened.

After protesters at a Washington state college called for a day without white people, a biology professor says he no longer feels safe on campus — and student activists complain they’re being vilified by conservative media.

Evergreen State College students said racial tensions have been simmering in recent weeks, but reached a boiling point when a faculty member disagreed with their plans to protest what they say is institutional racism at the Olympia campus, according to The Olympian.

Students were particularly incensed by an email that surfaced on Twitter on May 25 between Professor Bret Weinstein and Rashida Love, director of First Peoples Multicultural Advising Services. Weinstein, who is white, allegedly condemned the “Day of Absence” event that asked white people to leave campus for the day.

He called the day “an act of oppression in and of itself” and said he would visit campus in spite of the demonstration, according to USA Today.

I can’t even imagine the media extravaganza that would have formed if white people had tried something like this.

In case you would like to read the offensive email, here’s a picture for ya. 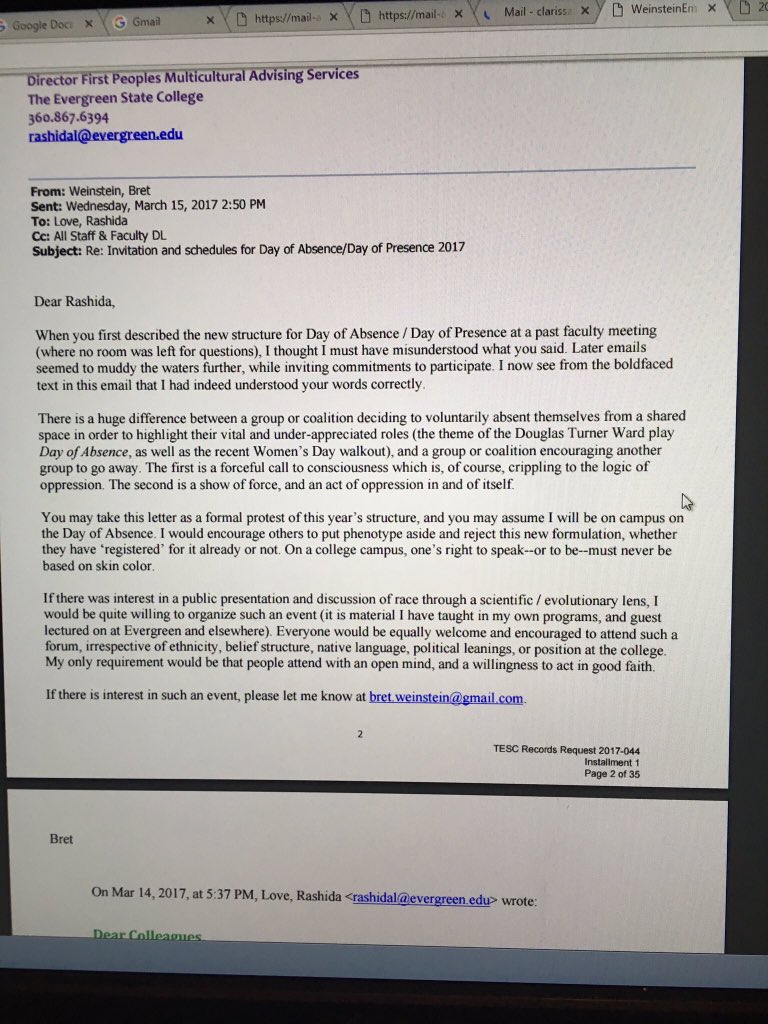 I know, everyone wants to feel special, and it’s easy to get whipped up into the emotion of something when you think that you’ve got the chance to let your specialness shine. However, this is 100% unacceptable activity from any race. To attempt to ban another race from an establishment is exactly what the Civil Rights movement was all about, they’ve just put the shoe on the other foot. I hope that each of us would have been counter-cultural enough to stand up for the rights of the African American back then, just as we should stand up for the rights of the Caucasians now. Because discriminating against a person because of the color of their skin is wrong, just like your hero’s said it was.