Anyone who thinks ISIS will take mercy or be lenient in any way possible needs to read this and understand they type of vile, wretched, human scum we are dealing with here.

The mentality of radical Islamic terrorists is that of a deranged person mixed with 100% insanity. These people think that Islam should be the only religion in the world and that they should rule with iron fists as everyone bows to them. ISIS will stop at nothing to terrorize and intimidate anyone in their path. And this is the most heinous proof we have so far.

After ISIS captured supposed Iraqi spies, they did no behead them as they have done in many videos in the recent past. What they did was much, much worse. ISIS has executed 25 people in Mosul, northern Iraq, by lowering them in a vat of nitric acid, according to several local news reports.

The men had been accused of spying on ISIS on behalf of Iraqi government security forces.

According to witnesses, the 25 alleged ‘spies’ had been tied together with a rope and lowered in a large basin containing nitric acid until their organs dissolved.

What kind of monsters could do that? ISIS apparently.

Nitric acid is a colourless, yellow or red, fuming liquid with an acrid, suffocating odour which is highly corrosive to all parts of the human body.

The executions in Mosul follows a number of deadly bombings in the capital Baghdad, as ISIS hopes to rebound from a series of battlefield losses in Iraq. 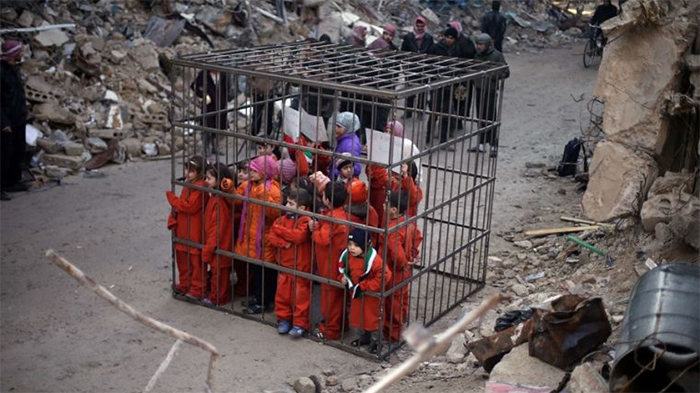 There is, however, good news in the fight against these sub-human pieces of garbage.

The terrorist group has continued losing control over territory across Iraq and Syria, a U.S. Military spokesman said this week, including almost half of what it had once held in Iraq.

The U.S. Defense Department had previously estimated that ISIS fighters had lost control of about 40 per cent of the territory they claimed in Iraq and about ten per cent of the land they held in Syria.

Those tallies had gone up in recent weeks, Pentagon spokesman Peter Cook said.

‘The number right now in Iraq is about 45 per cent of the territory they once held has been recovered,’ Cook said.

‘The number in Syria is anywhere between 16 to 20 per cent.’

ISIS stormed across large parts of Iraq and Syria in early 2014, meeting little resistance from Iraqi security forces and exploiting the chaos in civil-war-torn Syria.

Since August 2014, the United States has led an international coalition fighting back against the IS group, using a combination of air strikes and training and equipping local partners.

ISIS has now lost control of Ramadi and Heet in Iraq, but still control other important cities including Mosul and Fallujah.

This is by far the most disturbing bit of news I’ve heard in a long time. Liberls are worried that a Donald Trump Presidency would be the end of the world as we know it. Get a clue, idiots. ISIS coming to power could be, and you have Obama to thank for their uprising.

Do you think we should wipe out ISIS at any cost? Lets hear it in the comments.