Tim Kaine was so sure of himself last night in the VP debate, even saying several times “check the tape” or “this is a check the tape moment” suggesting America fact check the truth about particular topics. So, we did…and it turns out Tim Kaine is a flip-flopping fraud, just like his running mate. 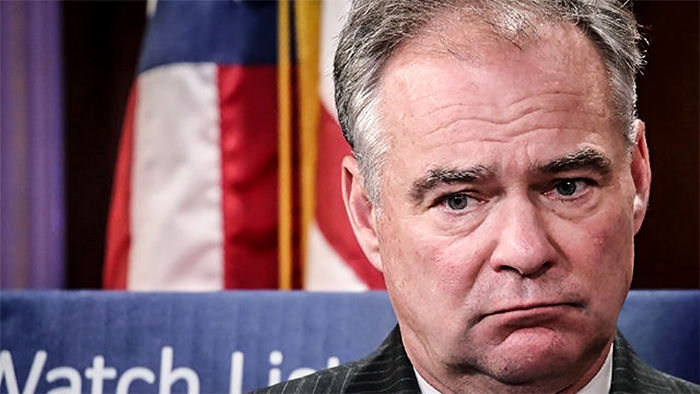 Flip-Flop #1 – RIGHT TO WORK: In August 2016, Kaine stated that he opposed Right To Work which was drastically different from the support he offered for it in 2006.

In 2006, Kaine Said He “Strongly Support[s]” The Right-To-Work Law. “House GOPers rejected Gov. Tim Kaine’s (D) nominee for Commonwealth Sec., the 1st time a nominee has been rejected since the Cabinet system was created in the ’70s. After the Senate unanimously approved ex-AFL-CIO Pres. Daniel LeBlanc, the House voted 55-42 ‘along party lines’ to reject him. House GOPers feared LeBlanc’s ties to unions and his opposition to VA’s 59-year-old right-to-work law. Kaine ‘said he has tried to be bipartisan, noting that’ 2 ex-GOP Reps. ‘serve in his Cabinet’ and that ‘he appointed’ Marty Kilgore, wife of his GOV opponent ex-AG Jerry Kilgore (R), as VA Tobacco Settlement Foundation dir. (Bellantoni, Washington Times, 3/8). Kaine: ‘The Secretary of the Commonwealth has no – I repeat, no – role in the enforcement of Virginia’s right-to-work law, a law I strongly support.’” (“The Fly-By,” The Hotline, 3/10/06)

Flip-Flop #2 – TAXPAYER-FUNDED ABORTION: Kaine previously was opposed to taxpayer-funded abortion but has now flipped to oppose the Hyde Amendment which bans taxpayer funding for abortion. Once Kaine was in the running for Hillary’s VP, he cemented his flip-flop status as a pro-abortion Senator by cosponsoring legislation that would remove all state restrictions on abortion.

Flip-Flop #3 – TRANS-PACIFIC PARTNERSHIP: TPP has been an important topic in this Presidential Race and Kaine has shifted on this issue as well. Initially, Kaine was insupport for TPP but following his selection as Clinton’s Vice Presidential Nominee, he switched to the side of opposition.

Flip-Flop #4 – OFF-SHORE DRILLING: In previous years, Kaine was in full support of offshore drilling but has jumped to other side again to match Clinton’s opposition.

Flip-Flop #5 – SAME-SEX MARRIAGE: When Tim Kaine ran for Governor, he said, “I’m Tim Kaine, I oppose gay marriage.” Now he claims to be a strong supporter of gay marriage.

Flip-Flop #6 – GUN CONTROL:  When Tim Kaine ran for Lieutenant Governor he campaigned on being a supporter of the second amendment. He also claimed that he would not propose any new gun laws. But as a Senator Kaine has voted for several anti-second amendment bills.

It should come as no surprise whatsoever that Tim Kaine will say and do whatever it takes to get elected, just like his running mate.

Clearly, he can’t be trusted to be the Vice President of The United States.