All American’s, this man needs our prayers!

The brave military man, Spencer Stone, that helped thwart an international terrorist attack on a French train has been stabbed in the U.S. of all places. This brave hero was outside a nightclub in Sacramento, California when we was jumped by men with knives and was stabbed.

He’s now in the hospital. 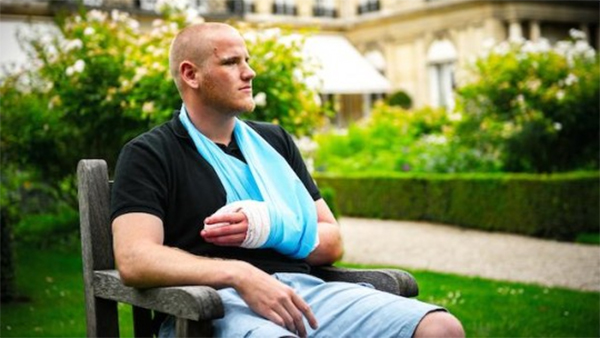 The attack happened around 12:45 a.m., when Stone, 23, was out with friends in downtown Sacramento in a popular bar district.

Sacramento Police stated that a “verbal argument” on the street led to a physical confrontation.

A police spokeswoman told NBC News that the Airman First Class was not targeted because of his heroics on the Paris-bound train.

Stone was stabbed multiple times, but is reported to be in stable condition.

When will people learn to not mess with the U.S. military.

The airman led the way when he, and his friends Alek Skarlatos, 22, and Anthony Sadler, 23, thwarted the train attack by Morocco-born Ayooub El-Khazaani. The heavily-armed terrorist stabbed Stone several times with a box cutter, wounding his neck and nearly cutting off his thumb (which French doctors were able to successfully re-attach).

Speedy recovery Airman stone! Every American is praying for you.