They just keep trying and trying. Muslims in America are still desperately trying to convince the public they are a peaceful people. They don’t fool me.

In Boston, not far form the site of a heinous Muslim bombing of the Boston Marathon, there sits a billboard on the highway unlike any other. It tries to portray the Muslim community as peaceful and loving while preaching hate is not their #1 priority.

Rubbish I say, but here’s what the billboards are all about.

The New York-based Islamic Circle of North America has erected 100 billboards over the summer that feature statements such as: ‘Muhammad believed in peace, social justice, women’s rights’ and ‘Muhammad always taught love, not hate; peace, not violence.’ Also listed are a website and a phone number people can call for more information. 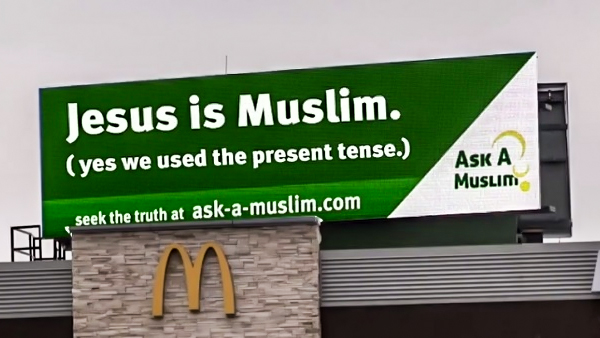 The group’s president, Naeem Baig, said the idea for the campaign arose after January attacks in Paris by Islamist militants on the French satirical weekly Charlie Hebdo and a kosher grocery store killed 17 people, plus the three attackers.

The perpetrators wrongfully understood the teachings of the Prophet Muhammad, Baig said, and the American Muslim community wanted to reclaim the message.

Well it’s a little too late for that don’t you think? you’ll always hear the fact that only 10-15% (which is still a ridiculously high percentage or ANY people) of muslims are radicalized. Well guess what? There are 1 billion muslims on this planet. That’s 100-150million radical people out there. You won’t convince us.

This is also highly offensive to NYers and Bostonians due to the fact that they are close to radical muslim attack sites from 9/11 and the Boston Marathon. They should be taken down!