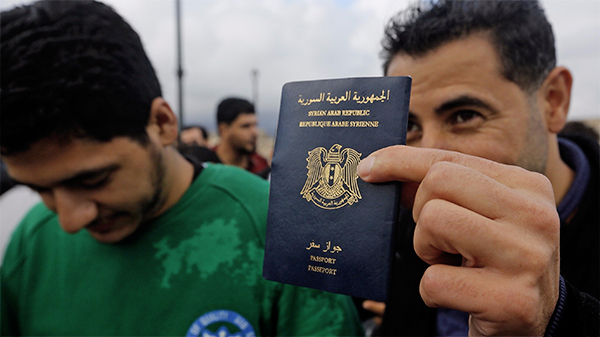 Pardon me while my BS detector goes off at it’s highest level imaginable.

Five of the men were detained late on Tuesday in the Honduran capital, Tegucigalpa, on arrival from Costa Rica, and had been planning to head to the border with neighboring Guatemala, police said. They said passports had been doctored to replace the photographs with those of the Syrians.
Anibal Baca, a Honduras police spokesman, said the five were trying to reach the United States.

A sixth man was turned away on Friday on arrival by plane from El Salvador, and was sent back. They are the first such cases of attempted illegal entry by Syrians into Honduras since the Central American country started compiling records in 2010.

Oh so this is the first time in 5 years that this has happened in Honduras? Oh yea totally a peaceful reason.

However, the case appears to form part of a spate of such incidents. Police in the former Dutch Caribbean colony of St Maarten on Saturday arrested three men they believed to be Syrians who arrived on a flight from Haiti and were traveling on false Greek passports.

In Paraguay, police detained a Syrian man on Sunday who was traveling on a stolen Greek passport.

Reports that at least one of the Paris attackers may have slipped into Europe among migrants registered in Greece prompted several Western countries to begin to question their willingness to take in refugees from war-torn Syria.

Hey Obama! They’re coming for us. Get your head out of your ass and realize what’s happening here. They get in, Americans might die, and their blood will be on your hands.