Liberals in America have taken over institutions of higher learning. It’s happened, and it looks like there’s no going back, as places that used to challenge opinions and mindsets now serves to coddle and babysit children with chips on their shoulder an give them safe space, while giving their parents an insurmountable amount of debt for their eight year Lesbian Dance Therapy degree. It’s now more important to be politically correct than be actually correct.

As an add-on to this insane idea, it appears that the Black Lives Matter fear-grip on the US is continuing and heads of organizations are making knee-jerk reactions with regards to any mention of the group or their #BlackLivesMatter Twitter hashtag.

The most recent incident is with the University of Houston, who just suspended their own student council vice president for this Facebook post: 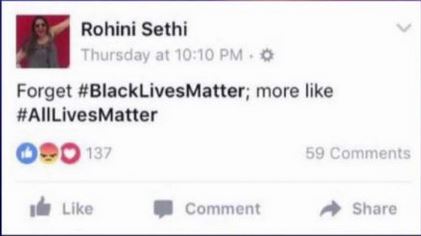 The post from student Rohini Sethi (a woman of color, according to the PC left) has since been deleted, but not after an uproar and subsequent suspension. The PC culture and everyone crying “racism” has reached it’s boiling point, people. Saying that all lives matter is now a punishable offense?! This is insanity and absolutely indicative of the fascism and groupthink that is promoted on college campuses across the country.

The vice president of the Student Government Association at the University of Houston was punished by the Student Senate for a Facebook post that read, “Forget #BlackLivesMatter; more like #AllLivesMatter.”

Rohini Sethi’s now-deleted post sparked outrage among some students, and the Student Government Association slapped her with some pretty severe sanctions.

If Sethi refuses or fails to meet any of the requirements, she will be kicked out of the Student Government Association entirely.

However, we can’t just sit idly by and let the college talk about hot they’re for free speech, then suspend a student for speaking her mind. This isn’t Soviet Russia and this isn’t North Korea, no matter how much Hillary or Obama want it to be.

We are encouraging everyone to write their local Texas representative to get this more national news. In fact, everyone should boycott the University of Houston in it’s entirety. The fact that this student was suspended for a Facebook post, which is protected under free speech rights, is not only illegal, but asinine at the highest level.

Until we can agree that all lives matter, this will continue. We can’t let Black Lives Matter and their racist agenda keep driving us all apart.