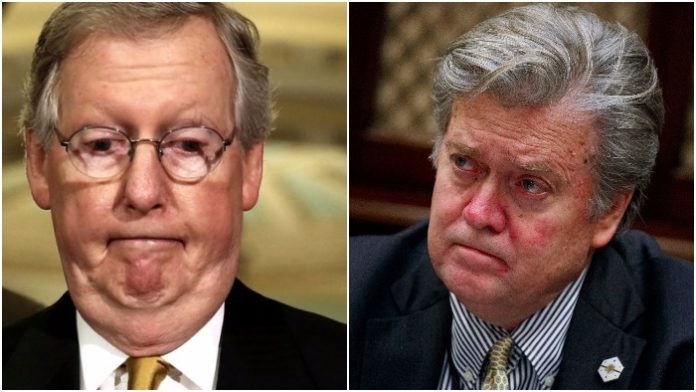 Conservative firebrand Steve Bannon appeared on Fox News Wednesday to blast the Republican party and demand a change in leadership. His ire was focused on Senate majority leader Mitch McConnell.

“I think Mitch McConnell, tomorrow, should tender his resignation.”

Republicans are nearly as bad as Democrats. They have complete control of Washington yet they’re struggling to get anything passed. McConnell’s shoddy leadership is largely responsible.

“They passed the budget, they’re starting to move on federal judges. But that’s all because, quite frankly, we put the spotlight on Mitch McConnell and said that this guy is just not supporting the President,” Bannon said.

Bannon has promised to attack the Republican party in the midterm elections by putting up alt-right challengers.

“We started a civil war — and Sean, you’ve been kind of part of this for, really, the last eight or nine years against the Republican establishment,” Bannon said.

“That’s how Eric Cantor got blown out as a Republican leader. That’s how John Boehner got sent home. That’s how so many seats were won at the congressional level, in the House, in Congress by conservatives. The conservative movement has really been at war with the Republican establishment in this kind of internal civil war for many years.”

Bannon has become very vocal since his brief stint in the White House.