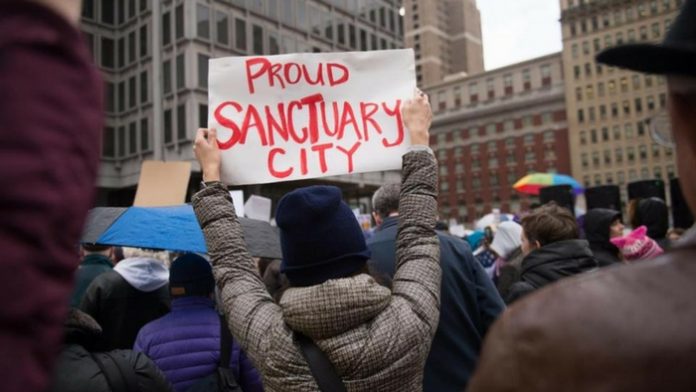 The subject of “sanctuary cities” has become a huge hot-button issue of late because of the hard line that President Trump has taken on the deportation of illegals. On the surface, a sanctuary city might resonate with evangelicals because of references to something by the same name in the bible. I assure you, however, that that is where the similarities end.

The ancient sanctuary cities were a place where a person who had used deadly force to defend themselves or in some way accidentally killed someone could go for refuge. If that were the case, since the death penality was regularly exercised back then, the perpetrator could cut and run to a sanctuary city so that the family of the person he killed wouldn’t catch up and put an end to him. Once he was inside those city walls, he would be safe until the courts could decide if the victim’s untimely end was intentional, or indeed accidental. Does any of that sound like our modern “sanctuary cities” to you? Yeah, it doesn’t to me either.

The question now has become; can an individual city ignore federal law in order to do the “compassionate” thing and not report illegals.

The legal argument the “sanctuary” cities rely upon bears merit, but they misuse and abuse the doctrine behind it. The “anti-commandeering” doctrine found one of its most articulate voices in Justice Scalia. The doctrine best distilled is this: “even where Congress has the authority under the Constitution to pass laws requiring or prohibiting certain acts, it lacks the power directly to compel the States to require or prohibit those acts.” The feds cannot shift enforcement to local government. That same doctrine makes the current path of defunding sanctuary cities a legally rocky road, especially in the current judiciary environment.

The Supreme Court made clear in two prior precedents the federal government cannot coerce states into acting as conscripted agents of federal law enforcement. When properly used, this anti-conscription doctrine is mostly a good thing, foreclosing the federalization of local life and municipal governments. When abused, it invites secessionist thinking. That is where a seminal precedent from the Second Circuit gives direction to support Sessions and Trump against the secessionist cities.

While the government can’t physically come and make a city conform to its wishes, it can cut off the gravy train headed in their direction. This is turning out to be a “my money, my rules” kind of punishment, and it’s looking like it might work.

There was one other biblical instance of sanctuary in the bible, and it applied when a King was after you. If that were the case, you could run into the temple, grab the horns of the altar and cry out for sanctuary. If you did that, and you stayed there, holding the horns, the King would almost certainly respect that sanctuary and not kill you.

Now, we don’t have the exact same temple today, but I personally, would be ok with that setup. Worst case scenario, the illegals are going to be neutralized by having to hold onto that alter with those law breaking hands. Best case scenario, they gather themselves up, and when they are found to have broken the law (well duh, they’re illegals) we deport them en mass.