Smithfield’s Chicken And Barbeque in Raleigh North Caroline found itself in an embarrassing position recently. It seems that some of the employees decided to make it personal when police officers visited their establishment.

A North Carolina fast food restaurant has apologized to police in Raleigh after an officer claimed employees sang ‘F*** the police’ while he was eating with his colleagues.

The local police union posted a notice on its Facebook page on Friday ‘thanking’ the Smithfields Chicken & Barbeque Jones Sausage in Garner.

The sarcastic message went on to recognize their ‘class and professionalism as you sang “F*** the police” as my brothers at Raleigh Police Department attempted to eat at your restaurant.’

Considering that those particular lyrics are meant as a protest to incite violence against police and racial profiling, one can see how they’d have a problem with it.

Someone who heard about the incident at the Police Protective Association decided that the restaurant should be called on their employee’s actions.

Apparently, the views expressed by those employee’s didn’t reflect those of the owner or any parent or affiliate resturants. 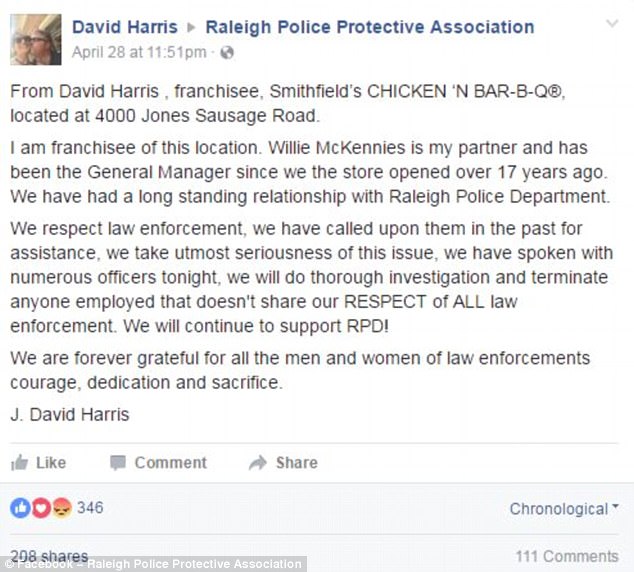 It’s great to hear that they did their best to fix the problem, however, it’s a shame that it’s a problem at all.  I don’t suppose there’s any way to live in a world where the general population sees police as the good guys. I do think it’s possible to live in a time when the police are allowed to stand up for themselves.

I understand that we should put this in the “win” column, but it’s just a shame that those who were in the restaurant weren’t able to see the men in uniform stand up for themselves instead of just having to take whatever the employees dished out. It seems like those who put their lives on the line for us should be given more respect than that.