This is ridiculous. Obama continues to put American lives in jeopardy and continually shows he does not care about our troops.

A few days ago, Iran illegally held two U.S. ships and 10 sailors as they humiliated them by making them appear on TV and even requesting the woman sailor to wear a hijab.

Not only that, but yesterday an Obama admin, John Kirby, said that the capture did not violate the code of the Geneva convention. 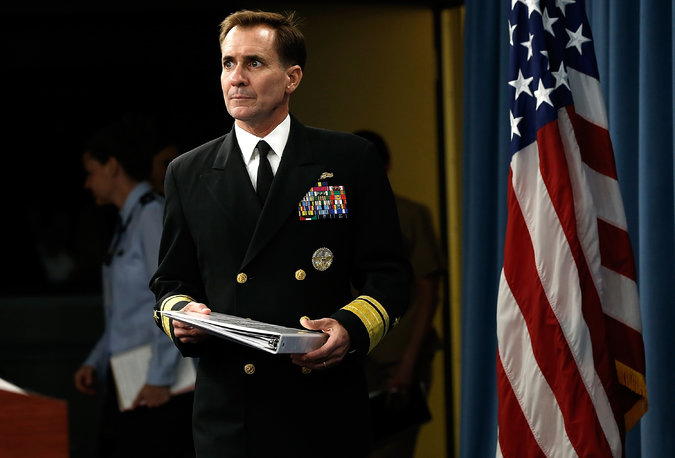 Yes, he did say that. And yes, he is wrong as Breitbart explains.

Article 1 says: “The High Contracting Parties undertake to respect and to ensure respect for the present Convention in all circumstances.” The phrase “all circumstances” applies to peacetime as well as war, as noted by Article 2.

Article 2 states clearly: “In addition to the provisions which shall be implemented in peace time, the present Convention shall apply to all cases of declared war or of any other armed conflict which may arise between two or more of the High Contracting Parties, even if the state of war is not recognized by one of them.”

Article 5 notes: “Should any doubt arise as to whether persons, having committed a belligerent act and having fallen into the hands of the enemy, belong to any of the categories enumerated in Article 4, such persons shall enjoy the protection of the present Convention until such time as their status has been determined by a competent tribunal.”

So the Geneva Convention–to which Iran and the U.S. are both parties–applies, at least partly, to peacetime, and to conflicts that fall short of declared war. Furthermore, it applies even in the presence of doubts as to whether prisoners qualify for its protections, until the status of those prisoners can be determined by a court.

Clearly, the U.S Navy sailors that Iran captured–and abused–came under the protections of the Geneva Convention. Kirby, and Obama, are wrong.

So not only did Iran violate the rules and lows of the Geneva Convention, meaning that they essentially put forward an act of war towards the U.S., but Obama and his staff are siding with them.

Who else can’t wait for this traitor to be out of office?