In probably the most sickening news I’ve seen all day long, President Obama has officially gone off the deep end. The Obama administration has just sent $1 million, yes that much money, to Planned Parenthood abortion clinics in 3 states: Iowa, Missouri, and Montana.

I have no words. How can you support a business that kills human life and sells baby body parts for profit!? Apparently the government has no conscience at all anymore. 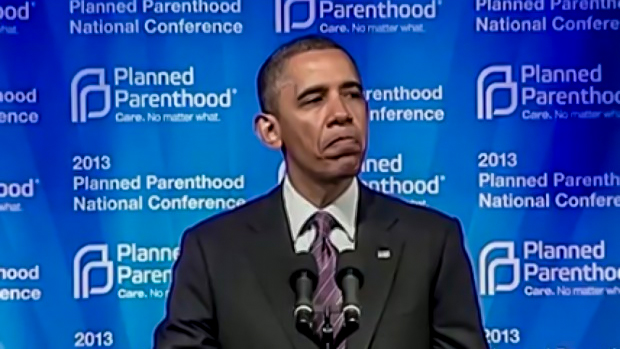 The Obama administration send federal grants using taxpayer dollars to Planned Parenthood abortion corporation affiliates in Iowa, Missouri and Montana to help them sign up new customers for Obamacare, which pays for abortions with taxpayer funds.

The chapters were among 100 recipients of $67 million in so-called ‘navigator’ grants doled out by the Obama administration Wednesday to nonprofits in 34 states that help people get covered under the Affordable Care Act.

Wednesday’s navigator announcement said the Iowa chapter will receive $304,373 to cover 77 counties, the Montana chapter will get $337,555 to focus on rural groups, including American Indians.

In Missouri, the Planned Parenthood of St. Louis will receive $388,787, particularly to reach minority groups and Latinos, Bosnian and Vietnamese populations with limited English proficiency.

As you can imagine, the reaction was pure outrage.

Reacting to the news, pro-life Congresswoman Diane Black ), a nurse for more than 40 years and member of the Congressional Pro-Life Caucus, said Obama is wrong to ignore how Planned Parenthood kills and sells unborn babies.

‘This is unconscionable. A growing body of evidence suggests that Planned Parenthood broke federal law and now the Obama Administration is thumbing its nose at Congress and taxpayers by using this backdoor maneuver to boost funding for the scandal-ridden abortion giant,’ she told LifeNews.com. ‘This is all the more reason for the House to immediately pass my legislation, the Defund Planned Parenthood Act, which would freeze all federal funding to the organization – including navigator grants. As I’ve said in the past, the best time to act on this bill was before the start of the August district work period, but better late than never. The American people expect a bold response to the atrocities at Planned Parenthood and it’s time Congress delivered.’

I have no hope anymore for this administration, not that I had really any to begin with, but this is the final straw. Please let 2016 come quickly and please let Obama stop trying to ruin American lives and just become the lamest duck the world has ever seen. American lives count on it.