What’s funny, in a really sad way, is that Obama will never find fault in the actions of his own administration – it’s always someone else’s fault, even though he’s the one giving the orders.

Case in point: Obama put troops on the ground in Syria, which almost single-handedly gave the country to the hellish Islamic State known as ISIS, who is now our nation’s greatest threat.

Instead of saying that this was his fault, Obama blames anyone, including his democratic comrades, like Hillary Clinton, before himself. 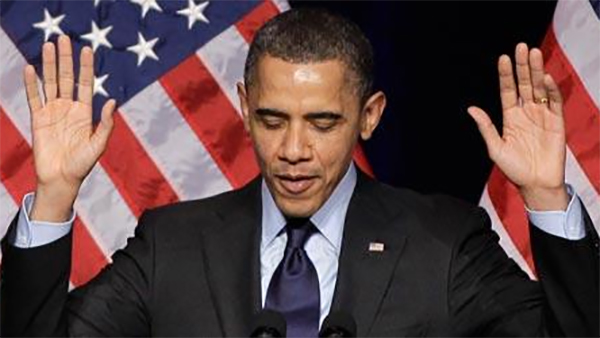 The finger, it says, should be pointed not at Mr. Obama but at those who pressed him to attempt training Syrian rebels in the first place — a group that, in addition to congressional Republicans, happened to include former Secretary of State Hillary Rodham Clinton.

It paints a picture that Obama got us into a mess that will be unbelievably bloody, whether we stay in, or out.

Either way, it underscored White House sensitivities about the widening Syrian catastrophe. With more than 200,000 killed in the civil war, a wave of refugees flooding into Europe, and Russia now flying in arms and troops, the president finds himself with a geopolitical and humanitarian mess that will most likely not be settled before he leaves office in 16 months.

Donald Trump also chimed in, citing what he would do if he were in charge:

Syria’s a mess. Why are we fighting ISIS in Syria? Let them fight each other and pick up the remnants.

Although I’m with Trump, it makes sense to stamp out the issue before it gets to us. What do you think? Let us know in the comments!