Who else could it be?

According to a new CBS poll, Donald Trump is poised to absolutely obliterate the competition in the next primary in South Carolina. With more than a 22 point lead, our many Trump is predicted to not only beat second place Ted Cruz, but also every single other candidate on the GOP side.

Here’s how the poll is shaking out as of this morning. 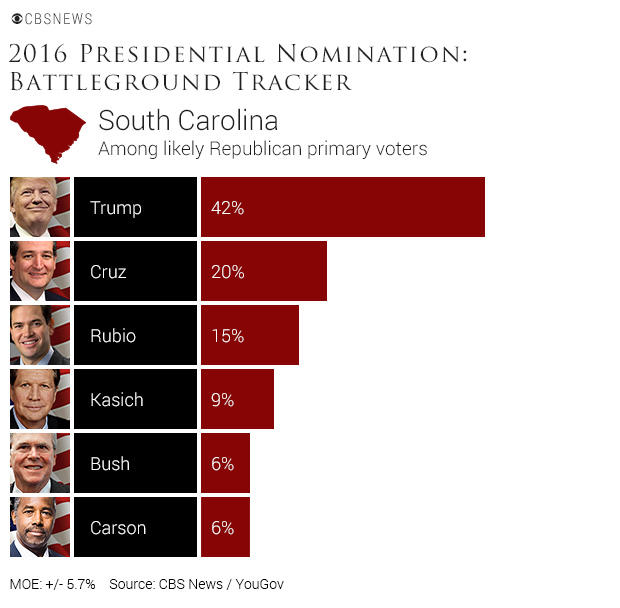 Ted Cruz is in second place, but well behind Trump. Cruz has the support of those who consider themselves very conservative, but trails Trump among all conservatives as well as moderates.

John Kasich has gotten a little bounce out of his surprisingly strong showing in New Hampshire, but he may be limited here by the fact that evangelical voters are not as strongly in support of him as non-evangelicals.

For Trump voters, who have been relatively steadfast in their support over the last few months, the percentage who say they’ve firmly decided on Trump has increased. Trump’s lead among evangelicals is up from January, and he has widened his lead among conservatives, too.

It’s still funny to me how little support Trump receives from political pundits, consultants, and the media in general. His polling is higher, he destroyed Cruz in New Hampshire, and he’ll likely take South Carolina. Wake up people. Trump is who we need to bring this country back from the brink. Keep on hating. Trump matters to those who matter most: the voters!