Here’s another strike for the “religion of peace.” This morning, a flight on Somali-owned Daallo Airlines from Somalia to Djibouti in East Africa, suffered a rupture in the cabin five minutes after takeoff.

Now, I know what you’re thinking – an airline that has had a history of terrorist activity and operates in a Muslim hellhole has an explosion in one of its planes – the cause must be obvious, right?

Not according to the liberal media, who are reporting on the reason for the explosion as “unexplained.” Here’s why that’s complete and utter BS. 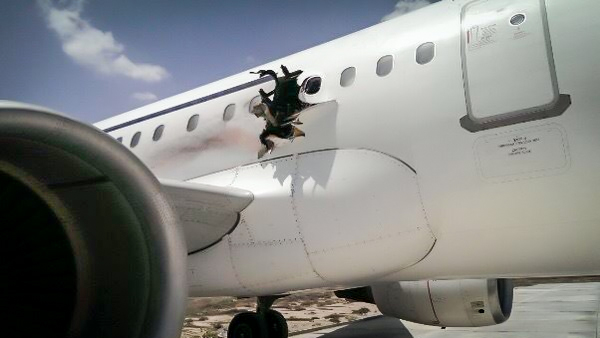 A Daallo Airlines flight traveling from Somalia to Djibouti in East Africa landed after an explosion tore a gaping hole in the Airbus A321 jet. Two were reportedly injured, though local eyewitness reports say that a “severely burnt body” was spotted falling from the sky.

Now, I’m not a plane expert, but the fuel usually isn’t on the inside of the plane where the passengers are. Notice the burn marks on the fuselage and add to the fact that eyewitnesses claimed to see severely burnt bodies falling from the sky, and it leads to one thing – a dummy terrorist in a majority Islamic state that wanted to ignite the fuel in the wings and ended up burning himself to a crisp. The fact that the plane didn’t rip apart means that it wasn’t high enough, or that the blast wasn’t large enough to cause a catastrophic failure of the fuselage.

Either way, the plane and all of its passengers survived.

Photos of the damage to Daallo airlines taken after the emergency landing. Two passengers were injured. #Somalia pic.twitter.com/2A5XTyOajm

Daallo Airlines has a history of terrorism-related incidents, including one in which man who wasarrested trying board an aircraft with potentially explosive chemicals and a syringe, and a hijack attempt in 2009.

The plane made an emergency stop, and although two passengers were injured, no one was killed. While no one else will do it, I’m going to the record as saying that this is Islamic terrorism without a doubt.

Don’t believe me? Take a look at TWA flight 840, a flight that suffered an explosion from a terrorist’s bomb. It looks IDENTICAL: 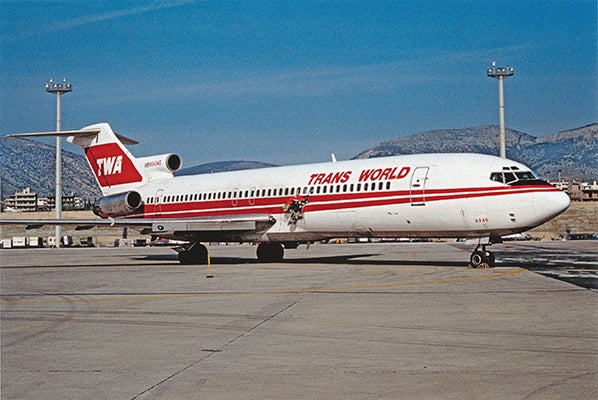 When news agencies tomorrow will spin the story, you’ll have heard the truth here first. Share this EVERYWHERE!

An alleged video of the aftermath from the inside of the plane has emerged. At this point in the video, the plane is flying back to Mogadishu with an enormous hole in the fuselage.

News sources are already calling it a “botched terror attack” with a foiled plot by a dummy terrorist – I wonder how they came to that conclusion:

A mystery blast which tore through a plane killing at least one person may have been a botched terror attack foiled by a flight delay.

Witnesses on board Daallo Airlines Flight D3159 described the burning body of man being sucked through a huge hole the ‘bomb’ ripped in the fuselage .

This means any potential bomb on board, if set to a timer, exploded at a lower altitude giving passengers a better chance surviving the blast.

The pilot is quoted as saying “It was a bomb.”