In case you missed the subtle shift in mission statement, the feminist movement now is now being inclusive of those who believe in Islam. This seems like it would be in direct violation with what feminism set out to do, considering how horribly backward that religion is toward women, but somehow it’s become the “in” thing to do.

With that, comes including Muslims into their leadership. One of those leaders is Linda Sarsour. Sarsour is a Sharia law activist who openly calls for Sharia (Islamic) law to be upheld here in the United States. This is a law that is downright abusive and oppressive to women, but I guess when eternity is riding on your letting men beat you to death or throw acid on you, you do what you’ve got to do.

New York Senator, Kirsten Gillibrand got the chance to write an article in Time Magazine about Sarsour, and instead of criticizing the anti-female rule of law that Sarsour stands for, she praised her saying It was an honor to write about Linda Sarsour, one of the organizers of the women’s march.

I know, unbelievable, but here it is.

The four exceptional organizers of the @womensmarch are on the 2017 #TIME100. It was an honor to write about them. https://t.co/c1M4VbDgJm pic.twitter.com/QR1FY6oyF3

Here’s a little sampling of the article in question.

“The Women’s March was the most inspiring and transformational moment I’ve ever witnessed in politics. It was a joyful day of clarity and a lightning bolt of awakening for so many women and men who demanded to be heard.

And it happened because four extraordinary women—Tamika Mallory, Bob Bland, Carmen Perez and Linda Sarsour—had the courage to take on something big, important and urgent, and never gave up. Because of their hard work, millions of people got off the sidelines, raised their voices and marched. The images of Jan. 21, 2017, show a diverse, dynamic America—striving for equality for all. The moment and movement mattered so profoundly because it was intersectional and deeply personal.

This is the rebirth of the women’s movement. These women are the suffragists of our time. And our movement isn’t going away—it’s just the beginning.”

I want to remind you about what Islam does to women, I want to yell and scream that this is would literally spell out death for our precious little girls. I can’t believe it would be needful to remind you that 5 and 6-year-olds regularly die of internal bleeding after being sold, married and then raped repeatedly by adult men. 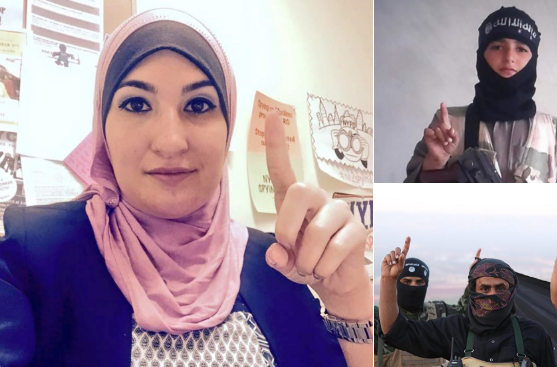 But you know all that, and they know all that. They just choose to ignore it, because right now this Islam is popular, and it might win them votes. It’s not their problem, right?