Today, all of America seems to be suffering from a lack of dictionary use. In case you thought it was just you, it’s not. The liberals are re-defining terms left and right in order to manipulate the emotions (and eventually the votes) of Americans. That’s why people that you used to think were pretty normal folks are suddenly racist, fascist and Nazis according to the mainstream media.

However, the group known as Antifa seems to be the most confused. They’re supposed to be anti-fascism, but they’re playing right into the scenario that gets us big, over-reaching government and authoritarianism. They also added an anti-racism platform during one of their club meetings, but they don’t have a great grasp on that either since they are only willing to protect the liberal people of color, and shout racial slurs against anyone else not in their ideological bubble.

One Trump supporting black guy found that out the hard way when an Antifa protester hit him with a cheap shot for asking the wrong questions (and by wrong questions, we mean any question that can’t be answered with a pre-memorized chant).

Apparently, BLM should be re-named Liberal Lives Matter because they don’t seem too worried about that particular black life.

I tried to find a really great definition to give you about what Antifa stands for. I found this instead in the Urban Dictionary and it seems pretty spot on. 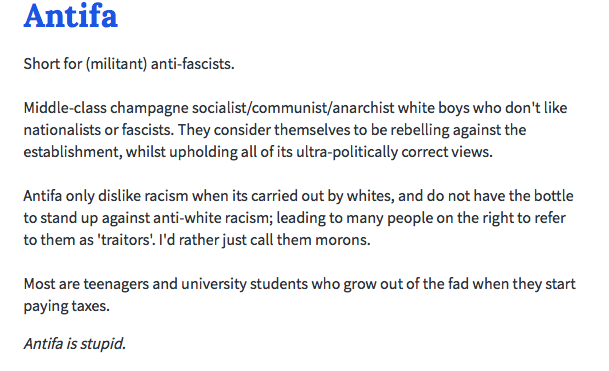 Meaning that the idealist in all of us want’s to believe that everything will be OK if we just spread the nice around, or “pay it forward” as the saying goes. Then age and better judgment catches up and shows us that human nature will always go amok if not guided by the wisdom of those with experience.

We’ve let an entire generation go to seed, and we’re paying for it with the lives of our law enforcement officers, as well as some of those whose idealism has them standing on the street and yelling at one another. It’s time we stop letting ourselves be manipulated by those who would profit off of anarchy, and get the general population wised up to how their crusades are going to usher in the kind of big government that they claim to be resisting.